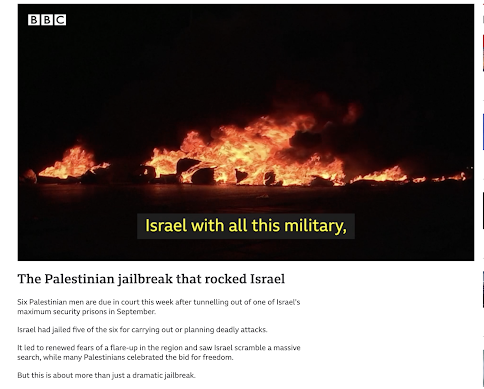 The Palestinian jailbreak that rocked Israel

The BBC and much of the UK media routinely approach Middle East news and views from the Palestinian perspective. Historically ill-informed and ideologically hostile-to-Israel staff are dispatched to the battlefield, where they cover selected stories and ignore others. This has been the case ever since I can remember and despite Tim Davies’s promises, the BBC is actually getting worse.

In this film Tom Bateman shows where his sympathies lie. Openly respectful towards the ‘resistance’, he shapes the narrative in a way that dehumanises the Israelis and distances them from the viewer. He pays the obligatory lip-service to “the other side of the story”, but Bateman’s script reeks of awe and admiration for the audacious Palestinian prison break.

“This is the story of an extraordinary jailbreak” Gushes the first caption, and the strap-line in the description exclaims: “But this is about more than just a dramatic jailbreak.”

So what he's saying is (to coin a phrase) 'this is not just an ordinary jailbreak - this is a BBC portrait of a dramatic jailbreak'. Our own version of The Great Escape. Epic!

Much give-away signalling is in there; in my former OTT tl;dr mode I would have gone into minute detail, citing each of the BBC’s go-to, stereotypically emotive subliminals such as  featuring their pet Palestinian old crones and those photogenic, cheeky and bravely defiant young Palestinian lads Jon Donnison used to be so fond of. But life’s too short to skin a biased BBC film, and who cares, anyway? (I do, though)

I drafted this a few days ago, and funnily enough, Camera has deconstructed the film for me.

"Clearly Tom Bateman’s revisiting of this three-month-old story does not provide audiences with any information not already available. Rather, Bateman’s project was primarily aimed at advancing narratives and omissions that have dominated but compromised BBC coverage for years, while attempting to ‘contextualise’ Palestinian terrorism."