“Let's get more analysis of that verdict now”... 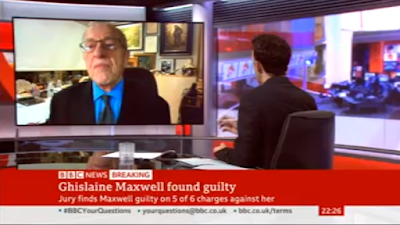 The BBC certainly knows how to put its foot in it.
Within minutes of news breaking of Ghislaine Maxwell being found guilty on five charges, the BBC News Channel interviewed Professor Alan Dershowitz.
This has provoked a backlash against the BBC, both here and abroad.
To summarise the case against the BBC:
Despite being personally involved in the case himself and previously being involved with Jeffrey Epstein, Professor Dershowitz was merely introduced as a “constitutional lawyer”, and someone who had been brought on to give “more analysis”. Moreover, his BBC interviewer, Ben Boulos, failed to challenge him in any way when he used the platform granted to him by the BBC to try to discredit Virginia Giuffre, the woman accusing both him and Prince Andrew.
Here's a flavour of the reaction:

Caoilfhionn Gallagher QC: Sorry, what?! BBC News now have Alan Dershowitz on to analyse Ghislaine Maxwell’s conviction, without any reference to his background;he’s simply introduced as “constitutional lawyer” as if he’s a neutral expert. Shocked. Utterly bizarre decision & does the audience a disservice.

Sarah Churchwell, writer: So BBC News has decided that the expert witness they need on the Maxwell trial is Alan Dershowitz. Who has taken the opportunity to say that it shows how accusations against him and Prince Andrew are wrong. I’d really like to understand how BBC News treats as an expert witness someone who literally admits without being asked that he is among the people implicated in the case. “The question is when will Giuffre be charged rather than her charging people like Prince Andrew and me.” I am not a lawyer, so I can’t comment on the legality. But journalistically, he should not have been presented as an impartial expert witness only to say the verdict vindicates him, personally. People have taken this thread as an opp to bash the BBC, so let me be clear I’m a fan and a beneficiary of brilliant people at BBC News. But this- Dershowitz as “constitutional lawyer” without explaining his screaming conflicts of interest - is not ok.

Rob Burley, ex-BBC: I don’t work there, but suspect bids being thrown out for relevant guests with little time to consider the implications. Very bad choice of first guest. In mitigation, probably small number of staff and possibly not enough editorial leadership. The cuts have gutted the newsroom.

When someone wondered what Jess Brammar, head of the BBC's news channels, Rob stuck up for her, saying, “I’d blame the Government for cuts to the licence fee for years if worried about this, not an individual and blameless (in Jess’ case) manager.”
And here are some headlines about it:

If anyone needs it, here's a transcript:

Ben Boulos, BBC: Let's get more analysis of that verdict now. We can now speak to constitutional lawyer Alan Dershowitz, who joins us now. This was a much-watched trial and after a long set of deliberations, spanning Christmas with a break, suddenly the jury reached a verdict.
Alan Dershowitz: Well, I think the most important thing, particularly for British viewers, is that the government was very careful who it used as witnesses. It did not use as a witness the woman who accused, for example, Prince Andrew, accused me, accused many other people, because the government didn't believe she was telling the truth. In fact, she, Virginia Giuffre, was mentioned in the trial as somebody who brought young people to Epstein for him to abuse. And so this case does nothing at all to strengthen in any way the case against Prince Andrew; indeed it weakens the case of Prince Andrew considerably because the government was very selective in who it used. It used only witnesses who they believed were credible, credible, and they deliberately didn't use the main witness, the woman who started the whole investigation, Virginia Giuffre, because, ultimately, they didn't believe she was telling the truth. They didn't believe that a jury would believe her. And they were right in doing so. So it was very smart on the part of the government.
Ben Boulos, BBC: And yet, the version, the image, that was portrayed of Ghislaine Maxwell as a sophisticated predator is the one that the jury have agreed with.
Alan Dershowitz: Well, the jury agreed that she helped Jeffrey Epstein and his activities, and the question is then whether or not she will be sentenced as if she were Jeffrey Epstein or sentenced as if she were simply somebody who facilitated and helped. And the other question is who else will be charged? Because the testimony introduced evidence that other people where guilty and involved. Again, Virginia Giuffre. She was alleged by the same women who the jury believed to have brought them to Jeffrey Epstein knowing that they were under age, of getting undressed, having sex with Jeffrey Epstein in front of them when they were under age in order to encourage them also to have sex with Epstein. So I think the next question is when will Virginia Giuffre be indicted and charged rather than her accusing people like Prince Andrew and myself and Ehud Barak and George Mitchell and dozens of other people who she has accused. So the next question is who else will be charged for facilitating Jeffrey Epstein's misconduct?
Ben Boulos, BBC: Just returning to the issue of the guilty verdicts again Ghislaine Maxwell, as a lawyer where you expect the sentencing to fall on the spectrum of prison terms that are available to the judge?
Alan Dershowitz: Well, I think she will get a substantial prison term because she was convicted on five counts, and the guidelines provide for fairly high sentencing. So it will certainly be in the double figures. It won't be five years or six years or seven years. It will more likely be in the teens. She will get credit, of course, for the time she has already served. I don't think she is going to get 30 or 40 years - that would be utterly inconsistent with what prior sentences have been in comparable cases - but I think she probably can expect a significant sentence. She will also appeal, obviously. She will not get bail pending appeal, but she will appeal, and within, say, eight months or so, three judges will decide whether the trial was fair. The fact that the jury stayed out so long and did distinguish counts - five yes, one no - will make it a little bit more appealing for her to successfully appeal. But there will be an appeal.
Ben Boulos, BBC: OK, we will leave it there, but thank you very much indeed for speaking to us.

On a lighter note, Ben Boulos kept calling 'Ghislaine Maxwell'  “Glenn Maxwell” through his stint as presenter. At least he didn't have to try saying “Caoilfhionn Gallagher QC”.

UPDATE [11.30am] - Given that many of the people complaining are precisely the kind of people the BBC takes notice of, this was inevitable: 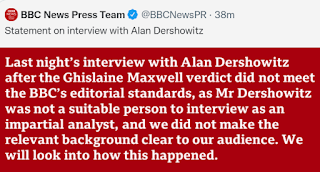