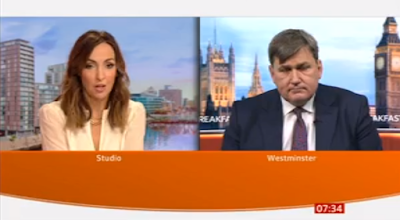 The BBC News Channel's been conducting lots of interviews today about the government's new drugs policy. Even Mark Easton has been deployed. Oddly Kit Malthouse, the minister responsible for it, appeared on BBC Breakfast this morning and Sally Nugent didn't ask him a single question about that. When he finally managed to steer the conversation onto the topic all she could ask him about was drug use in the Houses of Parliament. Important as that might be, if you've got the policing minister and you're lining up lots of people to comment on and criticise his government's drugs strategy throughout the day you should surely try to spare at least a minute or two of an 11-minute interview to question him about it?
Anyhow, when BBC home editor Mark Easton discussed the matter with Victoria Derbyshire at 9:40 this morning, he began by stating that with the drugs debate ''there are two broad views'': One is that we should see this as a criminal justice issue, be tough and crack down; the other is that we should see it as a public health issue and look at treatment and prevention and recovery. Guess which view Mark Easton made the case for [plus three separate mentions of funding cuts]? And there he was again later at 13:38 on the News Channel with one of his leading questions asking report author Dame Carol Black if the Government was ''preoccupied'' with the criminal justice element.
Posted by Craig at 14:09