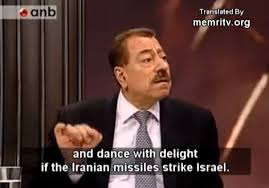 Nothing stops the BBC's Dateline from sending out invitations to controversial "Palestinian writer" Abdel Bari Atwan, the programme's most regular guest.

None of his earlier notorious statements - whether it be saying that he would dance in Trafalgar Square if Iranian nuclear missiles were to strike Tel Aviv or describing the Mercaz HaRav massacre (an attack on young students) as "justified" - has acted as a bar to those invitations from Dateline, or dinted the friendly respect shown to him by the programme's presenter, Gavin Esler (who even helps him launch his books), whenever he appears.

'Bari' has long been accused of speaking to Western audiences in a far milder way than he speaks to Arab audiences. A month or so ago, he appeared on an Egyptian TV station and described Osama Bin Laden as "half a terrorist". His comments were captured by the estimable MEMRI:

“whoever fights America and its enterprise in the region, and whoever fights Israel and the American occupation, is not considered a terrorist by me.”
“If you support the Palestinian resistance, you do not consider [Bin Laden's attacks] terrorism. But if you are with America, Europe, and Israel, you do consider it terrorism”

He's been banned from entering the U.S. on the strength of his past record and, during the course of this interview, expressed fears that he might not be allowed back into the United Kingdom on the strength of the comments he'd just made.

Needless to say, he was allowed back into the country.

Still, at least you might expect that these latest comments would finally put him beyond the pale at the BBC.

Not a bit of it. He was back on Dateline today, being treated as a wise expert by his friend, Gavin Esler.

Gavin has not (so far) even asked him about his "half a terrorist" comments. Nor, I suspect, will he. Ever.

Yes, nothing stops the BBC's Dateline from sending out invitations to controversial "Palestinian writer" Abdel Bari Atwan, the programme's most regular guest.
Posted by Craig at 13:07