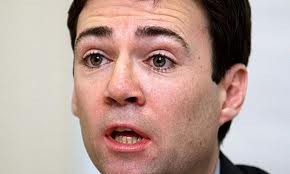 Further to my earlier post on the BBC's extraordinary failure to feature the story about the forthcoming report of those 13,000 'needless' deaths in the NHS - a story which the Telegraph and Mail led with and which both ITV News and Sky News considered a major story -, well the story is getting ever more politically dramatic....

....and it's not just being reporting by the right-wing newspapers.

The article beneath says:

Andy Burnham, the shadow Health Secretary, was under pressure on Sunday night over a shocking catalogue of fatal blunders at hospitals across England.


The health service’s Medical Director, Sir Bruce Keogh, will detail serious failings in 14 NHS trusts tomorrow, suggesting that as many as 13,000 patients could have died needlessly since 2005.

The findings will raise doubts over the last Labour government’s claim that the scandal at Stafford Hospital was an isolated incident and did not reflect wider faults in the NHS.

The Department of Health refused to comment on the report's findings ahead of its publication.


But it has already put Labour's shadow health secretary Andy Burnham - who was in charge of the department under the previous government - under pressure.

According to the Guardian:

It's a big political story - and it's a big health story - and yet the BBC News website (the country's most-read news website) still isn't reporting the story....

Breaking news....and yet as I type this what pops up, discreetly, at seventh place on the BBC homepage? This curious headline:

Clicking on it brings up a report, posted at precisely 20.48 BST.

Yes, the BBC has finally reported it!

An independent expert on mortality rates has suggested that ministers have suppressed details of NHS failings to avoid losing votes.

Prof Sir Brian Jarman said a "basic problem" with the NHS was that the government both provided health services and monitored them.

Unlike every other report, do you spot a missing word here? Yes, it's "Labour".

The use of  the word "ministers" in that opening sentence is highly likely to suggest current ministers - ie Coalition ministers - in the mind of BBC website readers. It's an unhelpful way of putting it at best, misleading at worst.

The present tense in the headline itself - "being suppressed" - might also mislead readers into thinking the story is about the present government rather than the last Labour one.

Ah, but continue to paragraph 3 and you get a clue about who's really in the frame here:

Yep, it's those dates - dates showing that the problem occurred on the Labour Party's watch. Not that the BBC is exactly spelling that out for you here though.

And what of the man in the firing line tonight? Well, paragraphs 4 and 5 get round to naming him, but they don't give much of an impression of a man who's under pressure tonight. No, they go straight to his version of events:

Mr Burnham, now shadow health secretary, was in charge of the NHS between June 2009 and May 2010 and said he left warnings in place at five of the 14 trusts and took particular action at Basildon and Thameside.

We hear more from Mr Burnham later, but no direct criticism of him - or of Labour.

The BBC surely knows how everyone else is reporting this - as a headache for Andy Burnham and the Labour Party - but is choosing to report it in its own way. That way seems much more helpful to the Labour Party than any other account I've read (even in the Guardian).

What's going on here? The BBC comes very late to the story and then gives every impression of spinning it in a direction favourable to Labour.

It's this sort of thing that makes BBC-bias-obsessed bloggers (like me) think that the BBC is biased.

Watch the report change over the coming day and see if things get better. (News Sniffer will hopefully track every change that's made).


Update: The headline of the article itself (once you've clicked from the home page) reads NHS failings 'suppressed for electoral reasons'. So someone at the BBC website made a very quick change to the article (I spotted them doing it, as there was an error 404 message for a minute!), though they haven't changed the original headline on the homepage.


This will presumably be the lead story on Today tomorrow. I can't wait to hear Jim, John or Justin tear a strip off Andy Burnham! (If it isn't, and if they don't....it's BBC bias again!!)
Posted by Craig at 21:16