The Tiger has shown himself at Gap 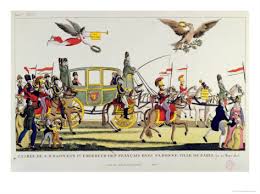 Do you any of you remember this classic example of journalistic 'adaptation to events' from English lessons at school?

It traces the headlines in the French newspaper Moniteur in March, 1815 as Napoleon made his return to Paris from exile in Elba:

March 9  The Monster has escaped from his place of banishment.
March 10  The Corsican Ogre has landed at Cape Juan
March 11  The Tiger has shown himself at Gap. The Troops are advancing on all sides to arrest his progress. He will conclude his miserable adventure by becoming a wanderer among the mountains.
March 12  The Monster has actually advanced as far as Grenoble
March 13 The Tyrant is now at Lyon. Fear and Terror seized all at his appearance.
March 18  The Usurper has ventured to approach to within 60 hours' march of the capital.
March 19  Bonaparte is advancing by forced marches, but it is impossible he can reach Paris.
March 20  Napoleon will arrive under the walls of Paris tomorrow.
March 21  The Emperor Napoleon is at Fontainebleau
March 22 Yesterday evening His Majesty the Emperor made his public entry and arrived at the Tuileries. Nothing can exceed the universal joy.

I was put in mind of that hilarious-but-true lesson from history when I began to think about writing this post. You'll soon see why.

If you follow the sequence of my posts over the last couple of days - 'Up To 13,000 Needless Deaths' In NHS Hospitals...Which "ministers"?...“What makes a story?”...Running orders...Chinese whispers?...and now...The Tiger has shown himself at Gap - you might perhaps notice something not entirely dissimilar happening.

I started out hammering away at the BBC's failure to report the Keogh report story - including that 13,000 'needless deaths' figure which the rest of the media were (wrongly) saying was to feature in the report. Then I slammed the BBC for failing to mention the trouble Andy Burnham was finding himself in throughout the course of Sunday and then got annoyed about a belated BBC article which seemed to be misleading BBC readers into thinking that the Keogh report was criticising the present government, and disguising Labour's responsibility for the scandal....

I'll pause there to say that, given all I'd been reading that day (other than from the BBC), it did seem at the time that Labour was pretty much the only party in the frame and that the report related to the period leading up to 2010. So I made hay with that: "The problem occurred on the Labour Party's watch".  "...the latest scandal to hit the NHS (and the Labour Party)".

After (if I may say so) quite rightly questioning the BBC's bizarre news priorities throughout most of Monday, as well as its (again) delayed reporting of the Keogh report story, I reviewed The World Tonight, pointing out (quite fairly!) the presenter's failure to counter the political point scoring of Labour's Lord Hunt but here I again slipped into the assumption that the report would only cover Labour's period of government. As for Newsnight, I gave credit to much of the programme's coverage though (rightly!) slamming Allegra Stratton's partial commentary. Even then, I was still thinking it was all about Labour though, politically-speaking.

However, a 'final update' on the same post (written the following morning) showed the doubts beginning to creep in as the thought crossed my mind - after reading Nick Triggle of the BBC's use of the death rates from 2010-11 and 2011-12 (an article which, I still think dodgily, failed to mention any date before 2010 - update: that's because 2010-11 and 2011-12 were the years Sir Bruce examined. So not so dodgy after all.) - that maybe the Keogh report could also be reporting on the period after 2010 and not just from 2005-10. That resulted in me writing:

Does this suggest that the pre-spin from the rest of the media has been biased (perhaps resulting from careful government leaks)? Or is Nick Triggle spinning now? We'll see when the report comes out I suppose.

Still, I found an article in the Daily Mail that slammed Andy Burnham, so there was hope!

A pause for work then, on coming home, I start catching up with what the report actually says. It seems damning enough, but not quite as damning as we were led to believe.

And then I saw comments that the 13,000 'needless deaths' figure wasn't what much of the media claimed either. Alarm bells started ringing. What if the promotion of the figure was the result of spin by enemies of Labour?

Closely following that came the thought, 'What if the many articles suggesting the report would cover the 2005-10 period when Labour were in power were also a result of the same anti-Labour spin? Well, now we know that the report covers Labour's period of government and the Coalition's period of government [update - though its specific focus is on 2010-12, the Coalition period]. So something was amiss in the earlier reporting, and something was missing from that reporting -, mention of the years from 2010 onwards.

The heavy concentration on the Labour angle, which even now is dominating the Daily Telegraph's take - their present headline being NHS inquiry: David Cameron accuses Labour of 'cover-up' over hospital failings -, now strikes me as being questionable. Labour may well still have many more questions to answer over this than the Coalition, but how certain can we outsiders be of even that, given the spin we all seem to have been subjected to in recent days - particularly those of us, like me, who are partial to a spot of Labour-bashing (due to our own anti-Labour bias)?

Am I now falling for counter-spin? (After all, this is close to what Labour itself is saying.) Well, I could well be. Given this weekend, I realise I seem to be susceptible to spin - especially when I allow my own biases to get the better of me. I'd better rein them back in again.

Update 17/7: I reached the conclusions of this post after studiously avoiding yesterdays' BBC coverage of the story, watching other channels and reading online newspapers instead, with the aim of getting up to speed with the story without seeing it through the BBC's filter.

A slow review of the BBC's coverage yesterday will follow over the next few days (it won't be quick as it's sunny outside!), attempting to answer the questions, 'Who's in the dock?', 'What makes a story?' and 'Is the BBC biased?'
Posted by Craig at 20:51