Insanity in the genes.

During the few years I contributed to the Biased-BBC blog the area that particularly interested me was the BBC’s one-sided attitude towards all Israel-related matters, and latterly the BBC’s naïve, misguided and flawed interpretation of  Arab Spring; from ecstatic live reporting from Tahrir Square, to the ongoing Pollyannaish euphoria over the dawning of democracy throughout the Arab World.

Those pieces are archived on that blog until another site revamp sends them into cyber-oblivion, but they still seem relevant, despite everything that has occurred since.

Immediately before Morsi’s arrest, or the military coup, or whatever you like to call the Morsi/ Muslim Brotherhood government’s downfall, the BBC was aggressively promoting the line that both the rabble in Tahrir Square and the ‘experts’ they wheeled in to analyse the situation were expecting too much too soon.
“Only one year? Not nearly enough time to prove themselves.” they kept insisting.

I watched one BBC News 24 anchor try very hard to persuade an anti-Morsi ‘expert’ to concur that all Morsi’s government needed, nay, deserved, was ‘more time’. Having completely failed, she brought the same thing up all over again with the very next guest. She (as Vic Reeves would say) “wouldn’t let it lie”. Was someone on high urging her, through the headphones, to keep flogging that dead horse, or was it a fancy notion of her own, one wondered.

When the protests in Egypt escalated and the army stepped in, the BBC decided to focus on the illegality of ‘the coup’ and the intrinsic insult to democracy of 'coups.'

The belief that democracy is the panacea for all the world’s ills is hard to shake.
Here in the civilised West we favour democracy as a form of government because although it’s flawed, all the others are worse.
It’s just  that some democracies are more democratic than others.

A couple of days ago Harry’s Place explored the issue.  As usual the comments pulled no punches. In response to:
“As much as I detest Morsi, the Muslim Brotherhood and everything they stand for, they were democratically elected.”
a commenter with inside knowledge said:

“No they were not. The parliamentary elections were rigged, marred by intimidation of voters, irregularities and assorted causes for concern that the elections were free or fair.Not that it mattered, for the lower house of parliament was soon enough abolished, leaving an upper house that rapidly was packed by the incoming president with his party cronies.And let's not start on the democratic credentials of a president *elected* by less than 40% of the population, after a campaign in which any other credible candidates were disqualified on one spurious ground or another. And let's not mention the election of the president which made the parliamentary elections look as pure as snow.FFS.

Some H/P comments are worth reproducing in full, because as far as i know they’re all routinely deleted after a week
A comment by “S&A” specifically concerning the BBC:

“I saw this covered last night from two angles, 'Newsnight' (the BBC's 'flagship' current affairs programme) and ITN. This is roughly how each programme presented events:Newsnight: (1) Began with a Paxman monologue along the lines of 'Yet again a democratically elected government has been overthrown by a military coup, and yet again the West has done nothing'.
(2) Over the next 15 minutes there is just one piece of vox pop by an anti-Morsi demonstrator. Everyone else that's interviewed or asked to hold forth is a Muslim Brotherhood supporter. (3) I lost count of the number of times Morsi's mandate, or the size of it, was mentioned. I do however recall how many times the reporter mentioned Morsi's loss of support amongst erstwhile voters - not once. (4) After the report, Paxman had a panel discussion in the studio - with the UK's representative of the MB.ITN: (1) Report began with a backgrounder to the crisis in Egypt. It mentioned the Army's ultimatum to the President, and the inflammatory speech the latter subsequently gave. (2) The reporter referred to the violence in Cairo two nights ago, in which Morsi supporters shot at opposition demonstrators (around 20 people killed in ensuing clashes). (3) ITN emphasised the fact that Egypt was polarised between pro and anti-Morsi factions, but made it clear that protests against the Presidency were nationwide, and not just due to an elite in Cairo. (4) Footage showed how extensive the anti-Morsi protests in the capital were, and how overjoyed the crowd in Tahrir Square was when they heard that the army had ousted the President.In both reports footage of the anti-Morsi protests were taken from a distance, to show the sheer size of the crowds involved. In the 'Newsnight' report the camera got as close as possible to the MB crowd (which to media observers suggests a resort to a common trick camera crews use when trying to hide how small a demo is). My conclusion is that we are now seeing the imprint of Ian 'Clark County' Katz on BBC2's 'flagship' news programme.

This comment on another H/P thread, from esteemed contributor Sarka was enlightening.
It was about a stupid and offensive Tweet from Hope not Hate’: (" Voltaire but he never had the benefit of going to Auschwitz and seeing where unfettered free speech ends up.”) which, in turn, concerned a longer version published in the Indy:

“There is a line in the sand between freedom of speech and the right to use hate speech. Freedom of speech does not guarantee you that right. We live in a democracy and we believe in free speech. People will now quote Voltaire but he never had the benefit of going to the gates of Auschwitz and seeing where unfettered free speech ends up.”

This is Sarka’s retort:

“ I imagine HnH would have an even bigger gripe with Voltaire if they read his views on Islam: Famously,"But that a camel-merchant should stir up insurrection in his village; that in league with some miserable followers he persuades them that he talks with the angel Gabriel; that he boasts of having been carried to heaven, where he received in part this unintelligible book, each page of which makes common sense shudder; that, to pay homage to this book, he delivers his country to iron and flame; that he cuts the throats of fathers and kidnaps daughters; that he gives to the defeated the choice of his religion or death: this is assuredly nothing any man can excuse, at least if he was not born a Turk, or if superstition has not extinguished all natural light in him."

(She says “famously” but sadly, not previously known to me) I won’t forget “extinguished all natural light in him” which for me is the nub of the problem.
Back to the BBC. 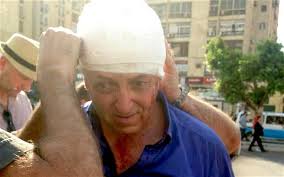 Bowen in a Bandage.
I understand there was some sort of stealth edit to Jeremy Bowen’s original, disingenuously benign definition of the Muslim Brotherhood as  ‘moderate, conservative and non-violent’. I think the word ‘moderate’ was dispatched to room 101.
Bowen is now sporting a gigantic bandage on his head. I have to say that he looks comical. A graze from a stray bullet according to the BBC, but people have been predicting(I presume they’re joking) that he’s about to blame Israel. In fact, since the stray bullets very likely emanated from the army and not the MB, Bowen won’t have to revise his allegiance to Morsi and his colleagues. Not everyone loathes poor Bowen.
A btl comment in the Mirror said:
BULLIT IN THE HEAD AND CARRIES ON WAT A MAN ?
Metaphysical or wat?

The same old delusion is waiting in the wings. As if they hadn’t learned anything from the past, the BBC’s assumptions seem uncannily like last time round. Déjà vu all over again.  This time all too many people still seem to think the Islamists’ disgrace will pave the way for true democracy, disregarding the obvious signs that the opposition consists of  oh so many factions, all at each others’ throats, with hatred of Jews their only uniting factor.
It’s beginning to look a bit like Einstein’s definition of insanity. There must be other definitions of it. I wonder what Einstein would make of the Islamisation of football, or Channel 4’s decision to broadcast the Adhan every day during Ramalamadingdong?

Or how would Sigmund Freud evaluate the mental health of professional Israel basher Victoria Brittain who has chosen to write an article praising Abu Qatada ( - he’s no terrorist) or, for that matter, the sanity surrounding the Guardian’s decision to publish it.

Somehow the BBC and its influence is all a part of this madness.
Damian Thompson goes further, on vaguely related issues, in the Telegraph.
Not about insanity - he is more concerned with criminality, towards which he thinks the BBC is edging. Closer.
“Let me explain. The news story is in Ariel, the BBC’s in-house magazine. As a piece of journalism, it’s so laughably twisted as to be useless: the phrase “deep liberal bias”, a quote from none other than the BBC’s former director of news Helen Boaden, is nowhere to be found. [..........]
He cites Helen Boaden who was caught acknowledging the BBC’s deep liberal bias one minute and blogging that “impartiality is in our genes” the next, the move to Salford, the crazy pay-off to a former employee, then:

“One of the sillier lines put about by the BBC is that it’s been too ready to allow its coverage of immigration and Europe to be dictated by politicians. The truth is that Auntie is the dominatrix in this relationship, whipping into line any MPs who say the wrong thing on its programmes. There are times when the Beeb behaves like a powerful unelected political party it its own right – while simultaneously gorging on public money like a government department that doesn’t have to answer to ministers.The Keating affair tells us the Beeb’s folie de grandeur is taking it closer and closer to the boundaries of criminality. Indeed, it may already have crossed it. In a funny way, I hope it has. We need a proper scandal to reveal the rottenness at the heart of the BBC; only then can we begin the desperately overdue business of breaking it up.”

Even people who formerly had little interest in anything outside their own four walls are noticing. “The world’s gawn mad, Mrs!” a man who had never spoken of anything other than the weather before remarked the other day.