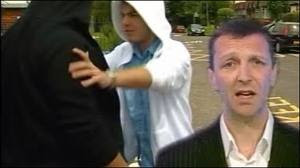 Many of you may recall the outpouring of public disagreement with the BBC's Mark Easton on the issue of "white flight" - and I certainly remember the Today interview about it. Here's Stuart Prebble's take:

When asked about its coverage of immigration stories and the charge of “political  correctness” within the BBC on this subject, [BBC] the Executive gave some examples of its coverage. The first, from the relatively recent past, was the piece by BBC Home Editor Mark Easton on the Today programme on 20 February 2013 on the phenomenon known as “white flight”. Contributors to the Today package included Professor Danny Dorling from Sheffield University (dubbed by Simon Jenkins as “Geographer Royal by Appointment to the Left”) and former Labour MP Oona King; perhaps not a perfect example of balance between differing points of view, or of a range of opinions. Mark’s thesis can perhaps best  be understood by referring directly to his blog on the subject from the same day:

"Something quite remarkable happened in London in the first decade of the new millennium. The number of white British people in the capital fell by 620,000 – equivalent to the entire population of Glasgow moving out.

The consequence, as revealed by the latest census, is that white Brits are now in a minority in London, making up just 45% of its residents.

So where have they gone to – and why did they leave?

I’ve been analysing and mapping the census data, and what emerges is a much more positive story than some headlines would make you think.

The movement of the white British is often characterised as white flight – the indigenous population forced out of their neighbourhoods by foreign migrants.
That may be part of the story, but I think the evidence suggests it is also about working class aspiration and economic success.”

Mark’s theme seemed to be that it has long been the aspiration of city-dwellers to move out to greener pastures, and that increasing prosperity over a number of years has made this attainable for many of London’s indigenous people. There is no reason whatever to suppose that Mark’s analysis is not, as he indicates, at least a part of the story; however, that’s not how his report was seen by sections of the audience. At the last count there were reported to be something in the region of 2000 comments from the public on Mark’s interpretation of the exodus, and it seems that the majority of them disagreed with him

Among those complaining was Sir Andrew Green from Migration Watch, who wrote to Helen Boaden, then Director, News, now Director, Radio, as follows:

“Dear Helen,
I hope you will not mind my expressing disappointment at the handling of this topic today which seemed to be blind to the real concerns of the public.
Mark Easton, and especially his blog which concluded that white flight from London is ‘a story of aspiration ... a story of success’, was almost a parody. This kind of talk certainly weakens the BBC’s authority and credibility with many members of the public.”

In the course of interviewing for this report, I found Mark Easton to be one of the BBC journalists who is most frequently noted for his breadth of knowledge, his industriousness, thoroughness and professionalism. Though he clearly indicates that Londoners “being forced out of their neighbourhoods by foreign migrants ... may be part of the story”, many of his audience believed that they heard something different. This may be another example of people perceiving bias in places where they expect to find bias, but equally, it underlines the need for BBC reporters to take even greater care than usual to anticipate potential responses and provide the full context when reporting on these sensitive areas.

On the same theme, I see that Biased BBC's Alan is quoted at some length:


I heard what some critics might regard as an even bigger journalistic “hostage to fortune” which gave rise to the following contribution to the “Biased BBC” website on 12 December 2012.

“The BBC’s Danny Shaw on Victoria Derbyshire’s show (1 hr 37 minutes) did a piece on Theresa May’s immigration speech ... his report was pretty balanced and even managed to put Labour in the frame for their immigration policy... What was surprising was Shaw’s reaction to May making the connection between housing problems and immigration… He said…‘She also referred to something I hadn’t heard before … she said immigration had actually increased housing demand in Britain… 1/3 of new housing being built for immigrants and housing might be 10% cheaper if it were not for this extra demand.’
He’s got to be kidding right? He’d never made a link between housing shortages and mass immigration? He must listen to the BBC for his news … it is rare to never when the BBC makes that connection ... how many ‘debates’ on housing shortages and the need to build more houses for the mysteriously growing population have avoided any mention at all of immigrants on the BBC? Many many many.
Still … maybe this report is the start of a new open and honest attempt to bring us the news as it is not as the BBC would like you to hear it.”