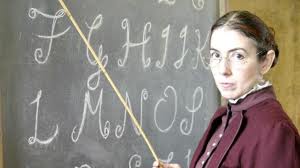 If there's one area of the BBC's domestic news coverage which strikes me as needing a Prebble Review all to itself it's the corporation's coverage of education matters.

Today's announcement by Michael Gove of a new national curriculum which seeks to challenge children from an earlier age and to re-emphasize traditional science, grammar, punctuation, dates in history, times tables and fractions, etc, as well as boosting modern skills like computing, has provoked a lot of opposition from the usual suspects - educationalists, teaching unions, the Guardian, etc.

I wondered what the BBC's online education reporter Hannah Richardson would make of it, as she's long seemed to me to be particularly close to those who oppose Mr Gove's educational policies and is always the BBC education reporter most likely to post a biased piece on any subject.

She hasn't disappointed, publishing an article today, What can five-year-olds be expected to learn?, which barely even bothers to disguise its lack of impartiality.

It presents three critics of Mr Gove's new curriculum in a row - people described as an "education specialist", a "veteran head teacher" and an "education specialist". All three of these experts undermine Mr Gove's position and attack his policies. There are no counters to any of their (many) arguments from Hannah herself, or from anyone else - which one exception. Her final commentator is the faintest of sops to the concept of impartiality. He supports one small aspect of Michael Gove's plans - the idea of teaching history chronologically in primary schools. Notwithstanding this, the whole report is decidedly one-sided, much as I would expect.

Those of you who follow your politics will know that Michael Gove is the man the 'educational establishment' (and the Left in general) love to hate. Often they like to paint him as a throwback to Dickens's Mr Gradgrind, the Victorian educationalist who believed that only facts matter. (The teaching unions, George Monbiot, BBC local radio shows, BBC Radio 4 current affairs programmes, etc, all make use of this meme.)

Interestingly, for those fancying an antidote to Hannah Richardson's condemnatory piece, I'd like to recommend the Independent's more nuanced but rather supportive editorial on the subject. The Independent dismisses the 'Victorian' (mis)representation of Mr Gove's position by his many opponents.

Tonight's main BBC One news bulletin, BBC News at Six, however, featured a report on the story by Reeta Chakrabarti which - and I kid you not! - chose to report from a London museum which gives children "the taste of a Victorian classroom", in Reeta's words. The stern teacher shouted at the children and brandished a cane as she spoke! A visiting school kid was shown looking confused and unhappy.

No overt comparisons were made by Reeta between that scary "taste of a Victorian classroom" and what the Independent describes as the view of Mr Gove's critics ("browbeaten children forced into what many consider an educational torture chamber when they might otherwise be playing in the sun") but none needed to be. This was subliminal advertising for the views of Mr Gove's opponents at its most blatant. It was (well, so it seems to me) pretty damn obvious that Reeta Chakrabarti chose to go to that museum, show that melodramatic scene and linger on that actual scared school pupil for no other reason than to paint Mr Gove's reforms as Victorian, Grandgrindian.

Can you think of another reason for it? If it was to show imaginative ways to teach history, why not show history being taught imaginatively in a school? Why show that particular scene rather than a scene from Roman British, Tudor, or Edwardian history? Why show this recreation of a nightmarish Victorian classroom to illustrate this story?

Nope, I think it's bias - plain and simple.

Reeta's closing words, incidentally, were "...which will lead to some questioning its relevance" - a negative way to end a pretty negative report.

It's 3/10 and a 'See me' for both Hannah Richardson and Reeta Chakrabarti here.

Update: OFSTED has e-mailed to say that I've been guilty of serious over-marking there. They say 1/10 is the correct mark for both reporters.
Posted by Craig at 22:24