Returning from a short spell away from the BBC and the internet I thought I detected a slight, but perfectly formed shift in the atmosphere.

I looked online at Sky news to see what was being said about the kidnapping of the three Israeli teenagers. The BBC was slow to report this story.

I looked on the Sky website and read the comments under the report of the incident. The discussion had strayed to the shooting dead of two Palestinian teenagers during a nakba-day demonstration. Two ‘teenage’ incidents with an implied comparison between the relative fuss over the “missing” Israelis and an ‘all in a day’s work‘ approach to the “murdered” Palestinians.

The number of Palestinian casualties resulting from the Israel/Palestine conflict all but renders another couple of Palestinian deaths unexceptional, almost routine, and the mainstream media’s default, cut-and-dried, reflexive blaming and condemnation of Israel equally so.

However, the very ‘ordinariness’, or predictability of the media’s automatic, unquestioning accusations against Israel are in the spotlight, because in this case there is something fishy about these particular shootings. There is an element of suspected Pallywoodesque tampering; the Al Durah factor. The IDF’s clearly defined use of rubber bullets. The pristine ‘live’ bullet found in the backpack. The odd way the victim fell. Discrepancies in various film clips. These anomalies have thrown doubts  into an already volatile mix. Not so long ago any such doubts would have been dismissed out of hand by most people, whose minds were firmly set in anti-Israel mode.

Is something prompting people to pause before automatically blaming and condemning Israel for everything bad that happens?  The surprising thing is that below the line, all the comments were supportive of Israel.  When has that happened before?

That is, even though it might appear that two possibly ‘innocent’ Palestinian teenagers have lost their lives, and the shooter could have been an IDF soldier, and even though the three kidnapped Israelis have been well and truly labelled ‘settlers’, the below the line comments were still making points sympathetic to the Israeli point of view. So is that significant?

Has the Trojan Horse, combined with rapidly expanding worldwide Islamist warmongering rung some alarm bells ? Has it sparked a connection, caused penny to drop, struck a chord?   If so, all the BBC’s efforts to play down the more absurd and the more violent manifestations of the ROP will be a complete waste of their time, simply because the audience might decide it aint having any of it.

Here’s more.
Look at the thread on Harry’s Place which tackles the same issue. It focuses on a gloating Tweet from a contributor to Electronic Intifada expressing delight at the kidnapping. Her remarks didn’t go down quite as well as she hoped.
The comments section is the jewel in H/P’s crown, and some commenters have also noticed a slight shift in attitudes. In regard to yesterday’s The Big Questions.

“Please try and catch a recording of The Big Question. Watch around 25 minutes a radical Muslim arsehole attack Jews in front of a woman Rabbi. He asks Nawaz to condemn the Jews because the same texts about stoning are in the Old Testament. She eventually replies, visibly upset.Later refers to the anti-Semitism against her.”

(The arsehole is Adnan Rashid)

“It was utterly appalling. I knew he was awful, but he was much worse than I thought he'd be (in public). It was quite shocking. Maajid and the rabbi were excellent. He seemed ignorant, and indeed plain stupid, as well as hateful. Ugh.”

“For too long now Islam has been given a free pass. He was attempting to deflect blame, attack being the best form of defence but today it backfired. I think he was expecting support, the usual sick applause when Israel is being denigrated - today it was not forthcoming.As for hateful, I would say that represents the understatement of his attack. I also think that Douglas Murray together with Maajid and the rabbi were excellent.Has anyone else noticed that lately there seems to be more open and truthful discussion re Islam being allowed on the MSM?”

I did watch the Big Questions by the way, as well as Craig and some of the H/P commentariat. As soon as I spotted the familiar characters sitting on the front row I knew some turbulent viewing would ensue. “Should Britain stop tolerating intolerance?” was Sunday’s one and only BIG question.

Nicky didn’t want to talk about the Trojan Horse issue, but everyone else  couldn’t resist doing so. “Gove” came in for the usual character assassination. The contents of the Trojan Horse letter was discredited in Ajmal Masroor’s eyes because the document was merely a hoax.

The shrill Muslim ‘revert’ Myriam got all hot under the hijab because someone called her a ‘convert’. “Don’t call me a convert” she demanded angrily during a brief hiatus in the constant barrage of interruptions she foisted upon other speakers as opinionated Muslim spokespersons are wont to do, thus ruining the prospect of any kind of reasoned debate. When things didn’t go her way, she contorted her handsome face into a supercilious smirk, as if to say these fools are so exasperatingly wrong-headed that all I can do is laugh at y’all.

Peter Hitchens put his bellowing voice and his own supercilious expression to good use while Douglas Murray argued calmly, with, I thought, a touch of resignation.  Daniel Hannan spoke up for English Values with passion and authority, the Rabbi countered with conviction when Adnan Rashid made unpleasant insinuations about “the Jews” to an almost palpable girding of loins. Daniel Hannan said that Rashid’s attempt to redefine Muslims as the new Jews -  (everything the Muslims believe in, the Jews believe in too) was something he never thought he’d hear in Britain, adding that found remarks about “The Jews” offensive, after which Ajmal Masroor  suddenly objected to people referring to “The Muslims.”

Maajid Nawaz, perhaps with his Lib Dem aspirations in mind, is expressing some increasingly secular concepts in public lately . One wonders what actually separates him from out-and-out secularism, or dare I say, straightforward apostasy, apart from losing his asaMuslim credentials.

I often watch this programme. It’s got a populist appeal. But then, I sometimes watch “Goggle Box’ too, which, with the voice-over by Caroline Aherne, must surely be a spoof. Can real people really, really be that ridiculous?

Anyway, some time ago, when The Big Questions first started on the BBC, or rather before it found its feet, it was a shambles. It was what’s commonly referred to as ‘car-crash ‘ television. The wrong people, including inarticulate members of the the audience, were allowed too much time to speak and others allowed too little. The featured participants were fairly low calibre and the whole thing appeared ideologically pro Muslim and stultifyingly politically correct. They seemed to be trying to boost the viewing figures by gratuitously sensationalising  the subject matter, whatever they happened to tackle, and they somehow managed to make the actual Big Questions unanswerable by using obscure and loaded phrasing.

Nowadays Nicky Campbell appears to have got the hang of it. He is able to shut people up when necessary and manages not to alienate them whilst doing so. Also, he seems to have more of a grasp of the public’s mood than he did initially. When one remembers the Immigration Row debate on Channel 5 hosted by Anne Diamond and Nick Ferrari, one has to acknowledge the comparative genius of Nicky Campbell.

The unexpected reactions of certain commenters on the Sky website haven’t prevented Sky News from reverting to type sad to say.

Let’s end this by mentioning the BBC’s recent cluster of rampant pro-Palestinianism. 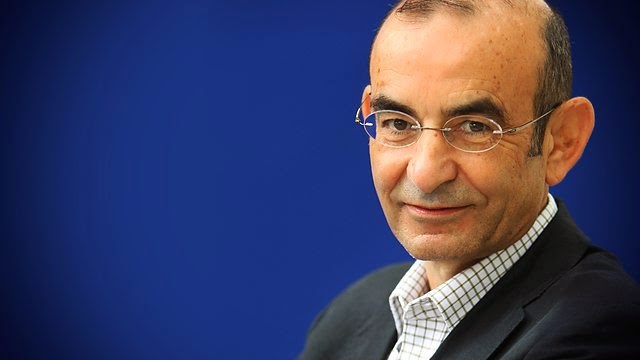 As Craig mentioned below, an edition of Desert Island Discs had Kirsty Young sympathetically  drawing out a life story tinged with bitterness from the castaway, Palestinian writer and lawyer Raja Shehadeh, whose passive aggressive account of his personal experiences was almost trumped by Ed Stourton’s sorrowfully recounted, selective list of Palestinian grievances on the World this Weekend through its one-sided report on the Middle East situation.

The BBC is destined to be ‘the last man standing’ while the rest of us look and listen as the Trojan Horse rumbles on and Islamist uprisings rapidly spread throughout the planet. With 90% of all news being Islam-related the reality of what lies behind the Palestinians' rejectionist attitude to Israel and ‘peace’ is slowly dawning on some of us, but it obstinately remains a mystery to the pundits at the BBC.