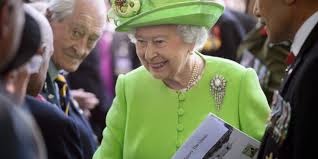 There were some sour comments on Twitter last night about the closing piece on yesterday's PM [and those agreeing with Robert Peston's view that the BBC is pro-establishment might have tutted too had they heard it], but I myself very much enjoyed John Laurenson's piece on why the French like our Queen.

John Laurenson: The Queen doesn't speak French like a native - how horrible would that be! - but she does speak it rather well. She's an even quite lyrical Francophile. "Paris is a light that glimmers in our imaginations", she said. And the people of Paris are quite keen on her too.
Une femme française: Quite a woman! She's been on the froon for sixty years now, more than sixty years...
John Laurenson: On the throne for sixty years?
Une femme française: Yes the throne, for sixty years.
John Laurenson: She's 88.
Une femme française: She's 88!! Quite good!
Un homme français: I think it's a way for you to have something strong in your institutions and maybe something like that is missing in France.
John Laurenson: It would be nice for France to have a king or a queen again?
Une autre femme française: Well, it would be nice for us to have anything except the one we have now! Anything!!
Peter Ricketts: I'm Peter Ricketts. I'm the British ambassador in France. I think a lot of French people feel that they've known the Queen for years, that there's a continuity. Now the Queen has been coming to France since 1948, when she came as a young princess, just married. They admire her sense of duty, her calmness, the fact that she's always been there.
John Laurenson: Next to the embassy, at the entrance to his English-style gentleman's club, I meet the TV and radio presenter Stéphane Bern, France's most famous monarchist.
Stéphane Bern: She reigns over us for...I say reigns over "us" because she's sort of the real sovereign.
John Laurenson: You say "she reigns over us" almost as if she has some influence even here in France?
Stéphane Bern: Yes she has, of course. Every state visit, it was impressive on the Champs-Élysées to see the people, the crowds, the waving. And they shout her name with love and with admiration.

John Laurenson: At a house in Dreux, west of Paris, next to the chapel where the kings of the Orleans dynasty are buried, I meet Princess Philomena and her daughter Antoinette. "The Prince is in a bad mood this morning", she warns. "Been struggling to make his internet router work". But when Prince Jean appears, striding across the garden laid out by his great-great-great-great-grandfather, the last King of France, the heir-but-one to the admittedly hypothetical French throne, is in a sunny enough mood. The router, like a wayward vassal, has been brought into line and the prospect of the Queen's visit is an uplifting one. He was there last time she came over for a D-Day anniversary and he saw how popular a monarch can be.
Prince Jean of Orléans, Dauphin of France, Duke of Vendôme: The American president came in a whoosh-whoosh noise with all the cars and the helicopters and stopping in front of the tribune and waving with a hand on one side and looking on the other side, and you could hear a kind of mood of disapprobation from the crowd that was almost 25,000 persons. And then when the Queen arrived you had only three grey range rovers with the British flag, and when she came out everyone stood up and applause. And a long, long, long time.
John Laurenson: Are you a little bit jealous of the British royal family that you were unable to survive?
Prince Jean of Orléans, Dauphin of France, Duke of Vendôme: We were always very jealous of England.
John Laurenson: "The French are republicans in their heads but monarchists in their hearts", says Prince Jean, who hopes they will end up reconciling the two and restoring a constitutional monarchy in this country. In the meantime they seem happy enough to make do with ours.
John Laurenson [à une femme française]: Can you sing it?
Une femme française [singing]: "God save our gracious Queen, Long live our noble Queen, God save ze Queen!"
John Laurenson [à une femme française]: Very good!
Posted by Craig at 09:20