Sunday at the Breakfast Table with Ed


This morning's Sunday on Radio 4 began with: Israeli President Shimon Peres and his Palestinian counterpart Mahmud Abbas will join Pope Francis at the Vatican on Sunday to pray for peace in the Middle East. Alan Johnston assesses the significance of the meeting.

Edward Stourton talked first to a softly-spoken female BBC journalist [ed - no, it was actually the BBC's Alan Johnston]. Ed described the meeting as "a very significant gesture, I suppose" and the softly-spoken female BBC journalist [ed - No, no, no! It was Alan Johnston] described it as "an island of hope in the gathering gloom in the region". Both, however, also expressed scepticism about the impact the Vatican meeting would have on the Middle East.

Ed was also keen to announce a scoop for Sunday. The programme had learned, he said, that (in parallel with Pope Francis' initiative), both Cardinal Nichols and Archbishop Welby had taken part in a prayer meeting with with the Israeli Ambassador and the head of the Palestinian Mission in London. Cardinal Nichols, unfortunately, let him down by telling him that Justin Welby hadn't been there after all, somewhat puncturing poor Ed's scoop.

Next...As part of the D-Day 70th anniversary service at Portsmouth Anglican Cathedral, Joan Scott Allen tells Edward Stourton about the letters her 27 year-old father penned to his family just days before embarking on the D-Day.

This was an interview with a lady who had never known her father. He was there for her birth though. He was killed during a post D-Day operation, having  "received gunshot wounds in his head". She had found a cache of his letters in a box in the attic, from which she'd learned about the depth of her mother and father's love and the "extent of their Christian faith together". She was read one such letter - his last letter - at the service broadcast after Sunday on Radio 4 - a service her son and grandson would be attending. She read another one for us on Sunday which, I will have to admit, brought a lump to my throat.

Next came: Trevor Barnes reports on the 30th anniversary of the 'Sikh Genocide' in India and asks what the anniversary means to Sikhs in the UK today and why they are renewing their call for an independent inquiry into the involvement of the UK government.

It is very rare to have a story about Sikhs on Sunday. This one concentrated on divisions within the Sikh community and concerns about the UK government's alleged assistance of the Indian government's crackdown on the Sikhs during the raid on the Golden Temple in Amritsar and its aftermath.

Next: Ahead of next week's Global Summit to End Sexual Violence in Conflict, hosted by William Hague and Angelina Jolie, Baroness Warsi tells Edward how religious leaders and faith communities can play a role.

Followed by a report: With the World Cup days away, Bruce Douglas reveals the Brazilian football team are training without a chaplain for the first time since 1986 and how the country's dynamic, fast-growing evangelical church is proving a good fit for its footballers.

Then came an interview about the plight of Nigeria and its stolen girls - a plight caused by the appalling Islamic nutjobs of  Boko Haram. The programme interviewed Dr Stephen Davies, a former canon of Coventry Cathedral, who is helping in the attempts to free the girls. A very brave man by the sounds of it. He refused to tell Ed Stourton where he was given that Boko Haram might hear it on the BBC and take violent action in response.

Next: A COMRES survey for BBC Local Radio reveals people who practise a religion are more charitable than those who do not. Edward asks if a person's faith really influences charitable giving.

Talking with a BBC colleague, Alex Strangwayes-Booth, we learned that 7/10 of us say we have given to charity over the last month. 3/4 of people who are religious gave, while only 2/3 of those who aren't religious gave - not a huge difference, but a statistically significant one nonetheless, allowing the BBC reporter to say that you're "less likely to give if you don't practise a religion". She also said that we're twice as likely to give if we think friends and families are doing the same and that we prefer to be asked to give face to face rather than online.

As for the reasons why religious people are more charitable, Alex suggested that Christians may be copying the example of Jesus and the Good Samaritan, and some still believe if the idea of tithing.

As for Islam? Well, she said that giving is a key part of being a Muslim and that £100 million raised during Ramadan. We heard from just one 'talking head' here. I've said before that Sunday has its own favoured charities, and that Islamic Relief is one of them. And, lo and behold, here they were again! 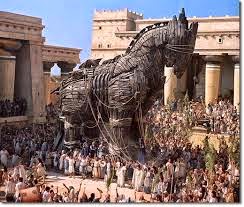 Next up, more Islam: As the bitter row continues over allegations of extremism in state schools, we debate where extremism comes from and how it should be tackled.

Farouk Peru said that part of the problem the government has with identifying extremists is that...


...what the government calls 'moderate Islam' is not easily separable from 'extremist Islam'. And the reason is that they refer to the same texts and often at times the same scholars....

The thing is the conservatives tend to...and I must emphasize this is a tendency not a necessity...they tend to believe in things which can manifest as extremist ideas - for example, the apostasy punishment. Now if you ask conservative Muslims what they think of apostasy, they'll say "It's allowed". Now that is only one step from saying, "OK, well there's a capital punishment for it".

If the government throws its weight behind movements which has [sic] beliefs that can manifest into extremism - so what I call 'latent extremism' - then, indeed, it's not going down the best route in my opinion.

I was actually teaching at an A-level college and they said, "Shi'ite Muslims are not Muslims. I was shocked to hear that, really".

He wants "a post-modern teaching of Islam" in schools [textbooks by Sheikh Jacques ibn Derrida presumably].

Finally, Sunday returned to a story it's been plugging for weeks - the story of a singing nun in Sicily who's been storming through some TV singing contest there. Well, she's won. Sunday duly cracked upon the champagne and blessed us all.
Posted by Craig at 10:34