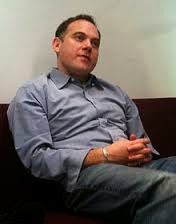 Ah, a trip down memory lane!

Here we pause for a moment to look over a fence at a comment on a Biased BBC Open Thread from August 2011:

Craig says:
August 7, 2011 at 2:52 pm
Being a former BBC business presenter, Paddy O’Connell isn’t very keen on what he (as today) likes to call “capitalism”. In his guide to the latest economic crisis, he played a clip of Paul Mason, and then added his own thoughts: “Now you can hear what he’s talking about by heading to Italy. Since investors change their mind in a constant fight between fear and greed, it works like this: To them Italian debt seems seemed safer 6 months ago and more risky 6 days ago.”
That’s what “capitalism” seems to boil down to for PO’C – fear and greed.
A few more examples of this from the past:
11/4/2010 Paddy O’Connell went to a demo by public sector workers before staging a debate between a businesswoman and a teacher. Paddy sided with the latter. One of his questions ran like this: “It seems to many people that it was capitalism and it was greed and it was breaking the rules that got us into this trouble as bankers flogged debt that they didn’t understand around the place. Do you accept that who led us into this was a great deal of private enterprise?”
9/5/2010 Paddy refers (gratuitously) to Sunday as “an oasis free from stock market speculation”.
28/11/10 Paddy introduces Richard North as a “free-marketeer”, immediately asking him “Is this a tough time to be a free-marketeer, because the banners in Ireland blame the free market for destroying the land?”
And then there are the bankers:
15/11/09 To CNN’s Richard Quest: “Richard, what I think you’re getting at is, people who saved are being punished by not being compensated from the Equitable Life fiasco, whereas people who borrowed, and bankers who’ve misled, are effectively having the tab picked up”.
12/12/10 Paddy interrupts James Delingpole, following some student riots, to say, “the students will have noticed that the bankers swizzed everyone, didn’t they? There was money and then there was debt and the bankers themselves didn’t understand what they were doing and the students say ‘Why should we be plunged into future debt because of the sins of our parental generation?’”

Then came (though I can't link to the page at Biased BBC here because, according to a Google message, Somalia pirates have put malware on it!):

Paddy O'Connell (who probably has Walter Mitty-like fantasies of heroically leading the People to victory over capitalism) is trying to get the term 'Financial Spring' flying, to describe the many hundreds of anti-capitalist protesters spreading like a very, very small contagion around the world. He means this as a counterpart to the 'Arab Spring', of which he and his programme ('Broadcasting House') were such happy-clappy exponents.

He tried in out on Twitter last night: Protests: Get ready for "Financial Spring,"

I put the term into 'Search' on Twitter and it looks like he's the only one using the term.

He pushed it again on his show this morning:  Protestors seeking a 'Financial Spring' took to the streets in co-ordinated events this weekend.

Paddy Spart is at it again.

Leaving Memory Lane behind and arriving at Yesterday Avenue....

During the Broadcasting House paper review, Lord Digby Jones was discussing the latest twists in the Plebgate scandal and what they mean for trust in the police. Suddenly, out of the blue, Paddy intervened, changed the subject and started bashing business again:

Digby Jones: I think that Theresa May was onto something when she to them, went into the lion's den, the Police Federation...my words, not hers...and said "You're out of control. You've become something which the nation aren't expecting." I do worry. I think to myself, "This is not what I expect." When you try to get kids to trust the police, trust the policeman, go to the policeman, try to get communities to work with the police....
Paddy O'Connell (interrupting): Digby...
Digby Jones: ...This is dreadful. If it's true, this is dreadful.
Paddy O'Connell: Yes. I mean the same could be said for many of the...for much of the culture of business, that you are representing often on the radio. Many people have their fingers in the till in corporations. Many stockbrokers sold, pumped and dumped shares. Banks sold debt they didn't even understand. There's a lot of blame to go around in society at the moment and if you want to blame the police do we not also have to say that young people aren't inspired by business as well?

It was like taking a trip down Memory Lane and meeting Paddy Spart along the way. Again.
Posted by Craig at 08:12