Anita's Got a Lovely Bunch of...Refugees 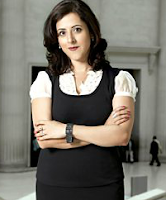 Yesterday's Any Answers was worth listening to. Yes, Anita Anand clucked at some of her callers (none of whom were playing ball on the 'migrant children in Calais' question), but she wasn't too bad this week and her callers were interesting throughout.

The only point to be made about it here is that Anita Anand persists in talking about 'refugees' rather than 'migrants'.

She's been quite dogged about doing so over the months (eg. "this refugee tide", "a worsening refugee crisis", "but as columns of refugees attempt to gain entry into Austria and our screens are filled with images of long and beleaguered lines of human being trying to get out of one area and get into another in Europe, I'm asking for your thoughts on this") and she was doing it again this week:

Is David Cameron right to say that by taking refugees from the camps in Europe we encourage many more to risk their lives in the sea?

I know there are those of you who want to talk about refugees.

She keeps doing so despite the growing official admission of what a lot of people suspected all along - that most of these people are not refugees, they are economic migrants. (Even Sweden and the European Commission are admitting it now.)

Anita did mention the m-word (well, one of the m-words) in her introduction though:

'A bunch of migrants'. Those four words uttered at the despatch box this week at PMQs have caused a storm of controversy. Just what do you make of the words chosen by the Prime Minister in his taunt to Jeremy Corbyn? And what of the sentiment behind those words?

"A storm of controversy?" Rod Liddle, writing in The Sunday Times, agrees with Sue here about that (and I agree with both of them):

It wasn’t just the ol’ Grauniad; the BBC went into overdrive, too, interrupting its hitherto non-stop news coverage of a mild form of dengue fever — aka the zika virus — which has affected almost nobody in the UK and has killed nobody anywhere. They went into “bunch fury” overdrive.

So did the opposition politicians, beside themselves with outrage that anyone could use a word like “bunch” when referring to people. And you are left with the distinct impression that either they are all mentally ill or that this is a confected outrage that has no purchase whatsoever beyond the opposition front bench and the BBC PM studio.