Did you see Ayesha Hazarika doing the papers this morning with Tim Montgomerie on the Marr show?   She reminds me of Lulu. She makes me wanna shout. No, not that - it’s her round face.
But did you notice her casually referring to Pegida as ‘fascists’? Is that what she meant? I wasn’t quite sure. If so, she slipped it in good and proper, no-one batted an eyelid.
Marr said something about ‘what’s been going on in Cologne.’
Here’s what she said:

”Well absolutely and we all were horrified by the awful  events on NYE when lots of women were attacked, but what’s now happened is the fall-out from these events has been quite interesting because the far right has seized upon those attacks as, you know, as an excuse to say, look you can’t have migrants coming in to the west, they don’t agree with our culture - I mean, obviously that’s not the right way to approach this and interestingly, lots of women have now taken to the streets to march against the fascists, saying actually the police did not take the right action as well, and I think what we’re seeing, all these facts, that there needs to be a proper examination across the whole of Europe about how we actually deal with this migrant crisis.”

What really went on in Cologne and who was really responsible is a bit of a murky business....

It’s incredibly important in this very sensitive and complex situation  to not pitch race and religion against these attacks on women. I think that’s a dangerous game to go down.

Douglas Murray has written a memorable piece about Cologne, which touches on interesting immigration-related issues, namely Trump and Tommy Robinson.
At times we all feel the need to distance ourselves from certain other people. On Harry's Place, Sarah AB seems to need to do it with Douglas Murray when she’s in the process of agreeing with him, or conceding one of his more incontrovertible points.
Almost everyone does it with forthrightly anti-Islam characters like Geert Wilders, Robert Spencer, Pamela Geller, and Paul Weston. In some cases a certain amount of distancing is appropriate, in other cases it’s less so. Pat Condell is another person with whom one must apologise for citing. Sorry Pat. But cite him one must. 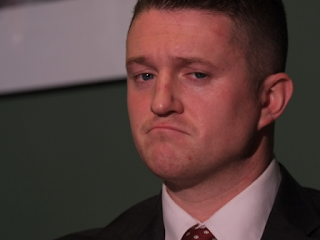 Anyway, it’s Tommy Robinson time again. Tommy has distanced himself from the EDL and has teamed up with Paul Weston and Anne-Marie Waters to create a UK version of Pegida. The shocking thing is that after making this announcement, the police, or some mysterious body which believes it's contributing to social cohesion, has unearthed a charge against him which had previously been dropped.... and resurrected it. Presumably with a view to shutting him down - putting him back in prison again with some of his enemies, long-term violent jihadis with ‘nothing to lose’. Goodness knows what would happen if they succeeded in murdering him.

While in prison for eight days recently, on what seems to have been a vexatious / frivolous sentence for ‘mortgage fraud‘, Robinson preemptively punched another prisoner who later accused him of racially motivated assault. The punch in question was  to prevent an arranged ‘boiling sugar-water’ attack on him at the behest of another dangerous prisoner. The police have decided to reverse their decision to drop the case, now that Tommy Robinson has started “causing trouble”.

If the state or the police are capable of trying to ‘no-platform’ Tommy Robinson by maliciously throwing him into prison every time he tries to make his voice heard, it’s an absolute scandal.  You can see more about this on Breitbart - a site I usually try to distance myself from a little. Sometimes they seem to be a bit too keen on digging things up and spinning them in a particular way. But sometimes I think that’s what needs to be done.
Posted by sue at 16:49