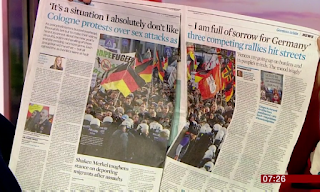 One of Helen Pidd of the Guardian's heart-warming stories had concerned how her otherwise "open-minded" father had advised her to put locks on her bathroom and bedroom door before Yasser moved in as she's a single woman and he's a young man a long way from his wife. She'd never thought of that! But "of course" the lovely Yasser had no such "frisky" intentions towards our Helen.

Following on pretty much straight after Helen and Yasser and their 'good news' migrant story came the BBC Breakfast paper review with Michelle Harrison of the market research company TNS.

Michelle herself spotted that a "segue" between her first choice of story - a headline in The Observer - and what had just gone before had taken place. And, indeed, that "segue" was virtually seamless. 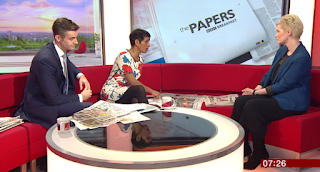 Here's how it panned out:

Naga Munchetty: We've been talking about this a lot...Ben, can you give me a hand holding this up?...because obviously the attacks, the assaults on women, New Year's Eve in Cologne, and the backlash that has come from it. Quite interesting the drip feed of information as to who was behind this attack and the interpretation of it as well?

Michelle Harrison: Yes, and obviously when I chose this headline I didn't realise we'd be having a segue straight after Helen and Yasser, and therein lies I think one of the really important parts of this story. So we have both a sense of the sort of demonising of migrants at the same time as we've issues that are sort of at the heart of the way that liberals think about society. So I think the broader context here - Merkel has been very brave over the last year in taking a stance on open borders, we've seen this week those headlines of children starving to death in Syria, and at the same time this is one of those stories that demonises, but we are talking about very. very important issues of people being able to live happily together in a multicultural environment. But very tricky.

Naga: Angela Merkel...Angela Merkel has though been forced to toughen the actions when it comes to migrants. Anyone convicted...this is what she's looking for now, changing the law...any migrant to be convicted to be deported.

Michelle:  And we've seen this story roll on, haven't we, from Germany having taken a real soft power stance on the way Europe should deal with this and slowly having to pull back to take on the views of many other European countries. So I think it's a very, very sad headline.

Michelle: That's what it is.