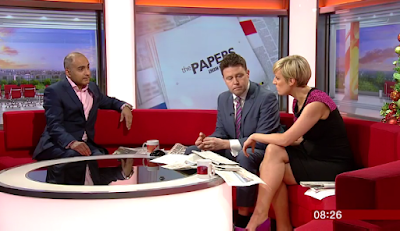 The paper reviewer on this morning's BBC Breakfast was writer and barrister Zia Chaudhry, founder of the Just Your Average Muslim project (and author of the book of the same name).

One of the things about keeping records about the BBC - even incomplete ones - is that they allow to to keep track of changes to BBC editorial policy over time.

A couple of years ago, I listed all the guests from a couple of separate runs of BBC Breakfast weekend paper reviews - one from 2011, the other from 2013/14 - and noted that, between 2011 and 2014, there had clearly been a determined effort (a) to feature more female paper reviewers, (b) to move away from using print journalists , and (c) to invite more religious guests - especially vicars.

A curious thing looking back over those two lists (which you can read here) is that they only included one Muslim guest, Mehdi Hasan - and even he'd (seemingly) been dropped over the intervening period, leaving no Muslims guests throughout the 2013-14 period. That was a very surprising omission for the BBC, wasn't it?

That has clearly changed now. Within the past month alone, Shaykh Ibrahim Mogra (on Boxing Day), Nazir Afzal and now Zia Chaudhry have all been on the weekend BBC Breakfast sofa reviewing the papers. A editorial decision has, therefore, obviously been taken - and put into practice - to include more Muslim paper reviewers on BBC Breakfast.

I will return to closely monitoring this for a while. Will any other editorial decisions be discernible?

Anyhow, here's part of how the start of this morning's paper review went:

Jon Kay: Zia, thanks for coming in. What's attracted your attention in the papers?

Zia Chaudhry: Well, the Prime Minister, not surprisingly, in his opening to the new year had something to say to those who don't seem to subscribe to British values. And, of course, he's addressing the terrorist threat and how it's not just those who pull the trigger and who set off the explosives who need to be tackled but those who...in the past he's used the phrase "quietly condone". But it's along the same lines that we need to subscribe to British values. But he's used a phrase, "loyalty to Britain" which is going to be interesting to define because a lot of people say one of the best things about being British is that you can dissent, you can take part in an anti-war demonstration without committing a crime. And it might be that some people interpret "loyalty to Britain" as meaning that we can no longer do that. I don't think that is the position but its perhaps a timely reminder that we need to be clear in the way we define these things and avoid a 'them versus us' sort of narrative that seems to be developing.

Steph McGovern: Hmm, and interesting as well because, of course, it will be this year when we have the EU referendum. So that kind of plays into that as well, doesn't it?

Maybe it's the after-effects of all that New Year cheer, but I really didn't quite follow Steph's logic there. Did you?
Posted by Craig at 15:07