Did you know that before Craig and I forsook fame and copious feedback - and all for the  noble principles of autonomy and obscurity (i.e., creating this blog) - we were well aware of the plight of Tommy Robinson aka Stephen Yaxley-Lennon?

I’m not one to boast, (no, really) but just this once I wish to point out that even back then I saw potential in the lad. 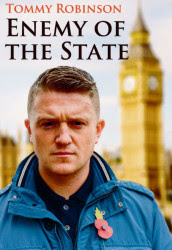 Yesterday Daphne Anson posted a video of the Ezra Levant show featuring our Tommy and his new book Enemy of the State, and I followed the links like a good girl, (Edgar Davidson,  Israelly Cool)
And I read most of the btl comments as well, so I did!

A commenter who uses the handle “John Smith” says Tommy is a fraud, that he’s only in it for the fame and fortune, he’s not really in danger, ‘it’s all about me me me”  -  and he claims that the whole Tommy Robinson phenomenon is nowt but a cynical exercise in self-promotion.

The thing is though, that even if that were the case, and who am I to know whether there’s anything in it - it doesn’t alter the fact that he’s doing something that needs to be done, taking a stand against the Islamisation of the UK.

They say Tommy’s book deals mainly with how he’s been treated by the state. His claims may be exaggerated; there may be a whiff of conspiracy theory-ism about it all. But, as they say: “just because I’m paranoid it doesn’t mean they’re not out to get me”  - and let’s face it, by backing the Islamists and punishing the patriots the authorities and the BBC are undeniably taking the line of least resistance. That’s Ezra Levant’s way of saying “appeasing”. What was happening was pretty obvious to some of us ever since that infamous “You’re not helping”  remark that came from a representative of the BBC, way back when.
Posted by sue at 19:09