Douglas Murray has tweeted a question to the BBC in response to an article by BBC Trending editor Mukul Devichand headline How the world was changed by the slogan 'Je Suis Charlie': 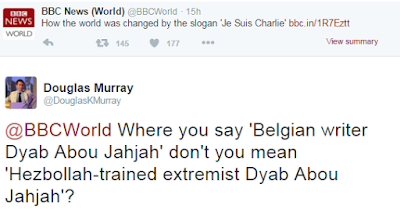 The day after that, another - much bigger - hashtag peaked on Twitter, "Je suis Ahmed," which used the name of a policeman, Ahmed Merabet, who was killed in the attacks and was a practicing Muslim.

"Je Suis Charlie attributed some kind of nobility to the content of the newspaper, which I couldn't really agree with," says Dyab Abou Jahjah, a Belgian writer who tweeted that tag. "My problem with them is that they publish racial stereotypes of Muslims."

"Of course it's their right," he adds. "But it's the right of people to be appalled by it as well."

BBC Watch points out that, as well as those ties to Hezbollah, Dyab Abou Jahjah also published a Holocaust denier's cartoon in 2006 and made highly inflammatory comments in defence of it, denouncing (for example) Europe's "cult of the Holocaust and Jew-worshipping" and talking of "hoax" gas chambers.

The Independent describes him as "a Lebanese extremist who was banned from Britain by the last Labour Government".

So Douglas Murray's question is indeed a "pertinent" one, isn't it?

Interjection (Sue)
One of Corbyn's mates, innit?
Posted by Craig at 17:30