Tulips in the snow 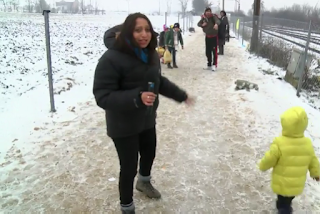 The same edition of BBC One's News at Six as Jenny Hill's piece from Cologne featured another emotionally-charged report on the migrant crisis (obviously with no connections made between the two items).

It contained many familiar features of BBC reporting on this theme.

An increase in illness among migrants as they face freezing temperatures on the route to Europe.

Against a backdrop featuring heart-tuggings images of children, including a toddler in the snow as its central image.... 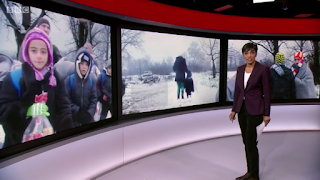 
Medics working at refugee camps in the Balkans say they're seeing a marked increase in the number of refugees falling ill because of the bitterly cold weather. Temperatures have fallen to as low as -11C degrees in the region. Our global health correspondent Tulip Mazumdar has followed migrants making the journey from the Macedonian border through Serbia to the Croatian border.

Despite, pace Cologne, the overwhelming majority of migrants/refugees being young and male and not Syrian, the focus here was on (a) an older male Syrian refugee, (b) a baby girl, and (c) a family with four young children, including an ill two-year old boy, and a female relative who wept at "the kindness of strangers is overwhelming" - that family becoming Tulip Mazumdar's main focus.

Her report ended with the emotive words...

But more people follow in their footsteps - the desperate and the weak. Tulip Mazumdar, BBC News on the Serbia-Croatia border.

...set against the following image - the one which had been the central image of the backdrop to the introduction of the story: 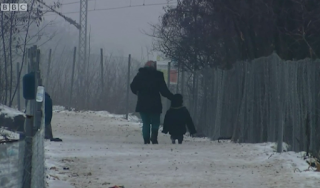 Of course, it is terrible that children are caught up in such a situation but the families who put them in that situation always seem to be given a free pass by the BBC.

Why did they take their children away from the warmth of Turkey at this time of year? No one at the BBC ever seems to want to ask them that.

The implicit message always seems instead to be that 'the desperate and the weak' need the kindness of strangers - our kindness.
Posted by Craig at 09:52