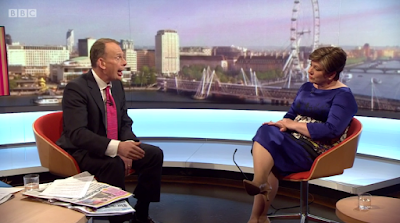 The usual suspects are at it again today, crying 'BBC bias!' at Andrew Marr.

(It's becoming as traditional a feature of British Sundays as fried breakfasts and roast dinners.)

I have to say that I thought they were all quite tough interviews this week. Mr Marr really went for it, sticking doggedly with a particular theme in each interview - none helpful to the interviewee. (Did Nicola Sturgeon have a sore throat or was she nervous at being challenged on her record on education?)

Here then is this week's exciting ITBB analysis of The Andrew Marr Show...

(Paul Nuttall is back on next week, so will Andrew Marr interrupt him more or less second time around? Tune in next week to find out!) 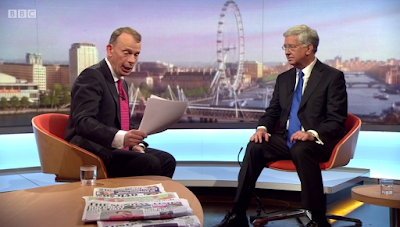 The interview with Sir Michael Fallon was introduced like this:

Sir Michael Fallon, the Defence Secretary, has been used by the Prime Minister as her faithful attack dog so far in the election campaign. He is not, I think it's fair to say, a massive fan of Jeremy Corbyn, but, of course, he has lots of questions to answer about the state of Britain's Armed Forces under the Conservatives. Welcome Mr Fallon.

It discussed the size of the armed forces, defence spending, whether the government has sufficiently funded measures against cyber-attacks, nuclear weapons, whether the Tories are a pro-war party, why Michael Fallon voted for the Iraq War and the Libyan War, and housing. (The contrast between the Tories' pledges and their record was its main 'angle'.)

The interview with Nicola Sturgeon was introduced like this:

Nicola Sturgeon, Scotland's First Minister and the leader of the Scottish Nationalists, made it absolutely clear at the beginning of the campaign what she thought it was all about - independence, she said was at the heart of this election. And she's with me now here in the studio.

This focused mainly on the SNP's record on education, but also nurses' pay, the party's election/second referendum prospects and Brexit. (The poorness of the SNP's domestic record was its main 'angle'). 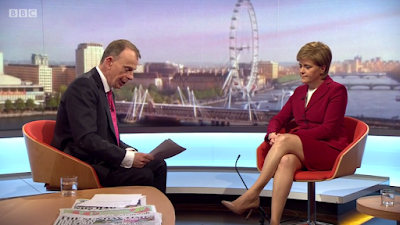 And for the sake of completeness, Andrew Marr's main introduction ran as follows:

Good morning. If there's one thing that's dominated this week's electioneering, it's the battle for the votes of the patriotic working classes - Labour promising fairer Robin Hood taxes and an ethical foreign policy and the Tories attacking Jeremy Corbyn for being soft on defence while offering those same voters new council houses. Millions of people want answers. Time, this morning, to probe a little closer. So, two radically different political personalities go head to head - Emily Thornberry, the Shadow Foreign Secretary who's attacked Theresa May for "fawning" over Donald Trump and Sir Michael Fallon, the Defence Secretary, who has savaged Jeremy Corbyn as feeble and dangerous for Britain. But we're not limiting ourselves to London this morning. Nicola Sturgeon, Scotland's First Minister and leader of the SNP, is here in the studio talking about why independence, whatever the unionists say, is on the ballot in this election. Our news review this morning features the BBC journalist who's been following Nicola Sturgeon on the campaign trail, our Scotland Editor Sarah Smith, Observer star commentator Andrew Rawnsley, and from The Sun, pulling no punches, Jane Moore. But first, the news with Sian Lloyd.

And that's that for another week....

....except, like Andrew Marr himself, to return to a theme I've posted about a few times now - AM's lingering obsession with the Iraq War. It cropped up again this week.
Posted by Craig at 15:39