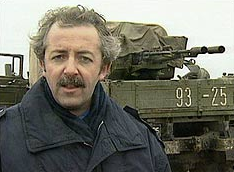 The BBC's Middle East editor Jeremy Bowen has begun a new five-part series on Radio 4 called Our Man in the Middle East.

It's been trailed as a "personal" history, and the website blurb backs that up by noting that he's "paid a personal price, coming under fire and losing a colleague in the course of reporting - on the worst day, he says, in his life."

(And, as we know, he blames the Israelis for that).

Looking at the episode previews, two of the five are specifically focused on the Israel-Palestinian conflict (as you'd expect from Jeremy).

That said though, having listened to the first episode today, it might actually turn out that all of the episodes ultimately hinge on the Israel-Palestinian conflict - especially given that this episode, supposedly focused on the Gulf War of 1991, ended up dwelling on Sykes-Picot and the Balfour Declaration instead.

Here's a transcript of the central portion of the programme.

It's the kind of history where Britain is always the guilty party, the bad guy.

Here Britain was the "duplicitous" deceiver of the honest Arabs, having caved in to the Zionist lobby, the country ultimately responsible for most of the past and present woes of the Middle East (via Sykes-Picot and the Balfour Declaration).

So here we go (and please imagine ominous minor-key music for its accompaniment):

Big powers have intervened in the Middle East to reshape it to their requirements since ancient times. It's strategically placed, connecting Europe with Asia and Africa. It's the home of the world's three great monotheistic religions, and for the last 100 years or so great powers have needed its oil reserves - the biggest in the world.

Two imperial grandees created and, some say, cursed the modern Middle East when they carved up the Ottoman Empire at the height of the First World War. One was a French diplomat, Charles François Georges-Picot. The other, Sir Mark Sykes, was British.

The Sykes-Picot agreement was designed to win the peace for Britain and France. It defined zones of influence in the Middle East for the two imperial powers. Borders of new states came later. But to win the war the British had already made promises to the Arabs. The Sharif of Mecca, Hussein Ibn Ali. lead an Arab revolt against the Ottoman Turks. In return he believed the British had promised him an independent Arab kingdom across much of present day Saudi Arabia, Syria, Iraq, Jordan, Lebanon, Israel and the Palestinian territories. Hussein kept his word; The duplicitous British did not. The requirements of empire came first. The promise of Arab self-determination was part of the collateral damage. Within 20 years a Palestinian scholar referred to Sykes-Picot as "a shocking document, the product of greed, stupidity and double-dealing".

Another vision of the future cut across Hussein's hopes. Zionists lobbied Britain, successfully, to support the idea of a Jewish state in Palestine. In November 1917 Britain's foreign secretary, Arthur Balfour, declared that Britain would "view with favour" the establishment of a national home for the Jewish people. Britain also promised that "nothing shall be done which may prejudice the civil and religious rights of existing non-Jewish communities in Palestine."

Making promises to both sides built a deadly contradiction into the Balfour Declaration. By the early 1920s Arabs and Jews in Palestine with killing each other. They are responsible for what they've done, but Britain started the fire.

For Palestinians the Balfour Declaration was a milestone on the road to catastrophe. For Israelis it led to statehood. A century on it's still politically resonant - triumphant or toxic, depending on your view of history.