Idly flicking through the ridiculous abundance of TV channels yesterday and landing, serially, on a seemingly solid wall of adverts, I realised once again the importance of the BBC. We do need an ad-free broadcaster. No, really we do. We need to be informed educated and entertained without being browbeaten or brainwashed.

James Delingpole explains why it matters that the BBC fails to live up to its charter obligations
“to produce output that is rigorously fair and balanced.”

Part of the problem is that the BBC believes that it is already fair and balanced.  Talk about a divided nation! The BBC is in its bubble, all lefty and consensual, and the other half are in theirs; alt-right, far right and “altfas”.

One thing nearly everyone seems to agree on is that the BBC is biased. Some think it’s biased to the left, some to the right. So it’s a bit unfair on the BBC. They’re damned before they start.

However, the BBC is “left-blind”. (I got that from an ad, you know the one with ‘nose-blind’, which means acclimatised to one’s own stench.) The BBC has slipped and slid into a default position wherein left means good ad right means bad.
So, as many of us have worn themselves blue in the face trying to point out, labelling something “right’ or ‘far-right’ is understood to be pejorative. The kind of pejorative that is wrapped so loosely in ‘code’ that it’s still just about possible to deny with a knowing  “innocent face”.

Critics of the BBC claim that think-tanks are frequently tagged with a ‘right-wing’ health warning, whereas ‘left-wing’ views are unlabelled.

James Delingpole was cross, and rightly so - (sorry) because his (London branch) online site Breitbart has to endure being lumbered, and implicitly denigrated, by being tagged ‘far-right’, and on this occasion “very extreme right”.

Of course, within the framework we’re obliged to use, Breitbart is right-wing - in that is it’s a staunch critic of the left, and will use the terms ‘left’ and ‘progressive’ as a pejorative, and in that respect I suppose the one mirror-images the other.

However, Delingpole’s criticisms of the edition of Word of Mouth with professor George  Lakoff were spot on.

I like words and linguistics as a topic. In a parallel world I might have been one of Professor Lakoff’s students.
(But I fear the droning timbre of his voice would have turned me off, pronto.)
Professor Lakoff’s superior, and dare I say patronising explanations of the terms “snowflake”, “alt right” and “antfas” were so off-beam that I almost felt sorry for him. They were the “dad-dancing” version, if you like. Misunderstood and uncool. Not to mention his definitions of “virtue signalling” and “Social justice warrior”. 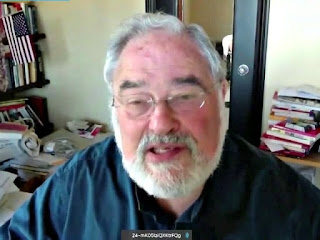 Even more irritating than that was his assurance that these terms were ‘hardly ever heard of’  in the mainstream. That is to say, in the ‘left’ world he inhabits. Only experts like him would be aware of them at all, he explained, and we were lucky he was here to enlighten us. I think even Michael Rosen was taken aback at that.

Another, even more disturbing and hypocritical aspect of the ‘progressive left’s attitude  was exposed too.
The ‘hardly ever heard of’ aspect. So much so that alternative (another misrepresented term) view, that of the so-called ‘right’ has now become verboten. (There you go.  See what I did there? “Sorta, kinda, like Hitler”.)

This no-platforming malarkey, of which Berkeley, the professor’s stamping-out ground, is a hot-bed.

Melanie Phillips was there.  Her “Zio” lecture was so ‘against the grain’ that it had to be carried out in a secret location. In a university. (You know, a seat of learning, where a plethora of ideas are explored) Or not.

Douglas Murray has written many articles, including The Death of Facts, about this state of affairs.
Universities are now silencing free speech. It’s not only in California that this is happening though. No Israeli or pro Israel speaker can even think of speaking in a British university these days without an angry mob screaming and shouting abuse.

Oddly enough a teeny counter movement is burgeoning. Did anyone see Alastair Sooke’s anti-Trump programme yesterday? Another of the BBC’s supposedly ‘above it all’ investigations, full of baffled and despairing  lefties and progressives.

Did you see Nadya Tolokonnikova from “Pussy Riot” ?(I thought the Pussies were in a Russian prison?) Her forehead and part of one cheek was adorned with shards of mirror. What if one of them stuck in her eyeball? I suppose punk is all about living dangerously.

The pro-Trump movement was not completely ignored through. Matt Rich, a publicist who worked for Trump, pulled Sooke up for saying people who work in the arts feel a “natural” resistance to Trump… “why do you say ‘natural’ of all things? […] I would certainly not call it ‘natural’. ”

A black singer called Sam Moore shocked his former fans and compatriots by singing at the inauguration, attracting opprobrium from “Snoop Dog”.
Sooke provided the obligatory opposing view again, in the form of an ironic gay, “counter-culture” “Twinks for Trump”.  An alternative alt-right Trump fan-base.

I mean, here I go again. I’m forced into the position of defending Trump and the ‘extreme right’ not because I support them unconditionally, which I do not, but merely because ‘someone has to do it.’