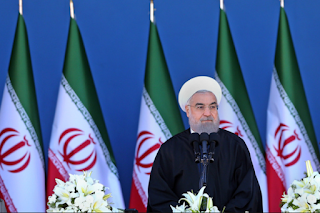 According to the BBC News website a "moderate" has won the Iranian presidential election - though, unlike me, the BBC didn't put the word 'moderate' in inverted commas.

Indeed, the BBC seems to be calling Hassan Rouhani a moderate (without qualification) across much of its output. Today's lunchtime news on BBC One, for example, saw the newsreader say, " Mr Rouhani, a moderate who agreed a deal with world powers to limit Iran's nuclear programme...", and Jeremy Bowen was on this morning saying (of Mr Rouhani), "He's a moderate who would like more openness in politics and society".

Still, here's a witty riposte from the comments section of the Times report on the same story:

Tadcaster Tory: A contest between a nutter and an even bigger nutter. Lovely.
Lyndonium (replying): But that's enough about the UK General Election...


Incidentally, in the singular and plural, the label 'moderate' has lately begun to be used by Newsnight presenters and reporters to describe people in the Labour Party who aren't Corbynistas, such as Nick Watt saying:

What's interesting is that the moderates in the Labour Party are relatively relaxed about this draft manifesto which they had obviously seen.

Was it the moderates leaking, trying to change it, it or was it the Left leaking it, going 'This is better than Corbyn sitting there next week delivering it?'

That must make the Corbynistas either 'hardliners' or 'extremists' or, perish the thought, like President Rouhani's opponents, 'conservatives'!
Posted by Craig at 13:45