Today's The World This Weekend featured a piece from the BBC's environment analyst Roger Harrabin which left me shaking my head in incredulity. And then, on re-listening to it, shaking my head again.

The bias was blatant, even by the TWTW's standards.

David Keighley has already excoriated it over at News-watch, beginning his piece with the question, "At what point do BBC ‘correspondents’ cross the line from offering a properly judged and impartial assessment into propaganda and overt electioneering?", and answering it with the example of Roger Harrabin's piece today.

It really helps if you take a deep breath and read the transcript in full. It shows that David is not wrong:

MARK MARDELL: And as one Carlisle resident said, there hasn’t been much about the environment generally, even though it was once near the top of many a politician’s agenda. What happened? Here’s our environment analyst Roger Harrabin.

ROGER HARRABIN: Air pollution, melting sea ice, wildlife depletion, a soil crisis, seas full of plastic. Why isn’t the election full of environmental angst? Well I think it’s mainly a question of worry capacity. Stephen Hawking would tell you climate change was the biggest long-term threat to humanity but in the meantime we’re also beset by terrorism, the refugee crisis, Brexit – they’ve filled up our worry-space. Coupled with that there’s been a shift in the way the media discusses the environment. The old consensus on climate change has been rattled by a long campaign from Conservative libertarians and UKIP. They scored their first success with wind farms, scattered protests against turbines were at first below the radar of the national media, but those angry local voices were eventually amplified by the Telegraph, and that began to influence policy. The government’s own surveys actually suggest that just 1% of the populace strongly opposes renewables, but that’s by the by. Then the Mail on Sunday launched its Great Green Con campaign criticising failings in renewables and highlighting uncertainties in climate science. When it was previously non-PC to declare yourself a climate change sceptic, a stance of what you might call anti-environmentalism has now been legitimised. This steady pressure from over its right shoulder has led the government to mostly gag itself on climate change over recent years and the sceptics have been claiming victory. But wait a minute – except UKIP, all the manifestos published so far, that’s including the blue one, recommit to the Climate Change Act. That sort of consensus hardly stimulates media interest, but it does prove the issue hasn’t gone away. There are details over policy of course. The Conservative manifesto aspires to the cheapest energy prices in Europe. The Greens promise affordable energy, not cheap energy. But as a slogan that’s not quite so catchy. For all parties Brexit looms large, 80 % of the UK’s environmental policy comes through the EU. How will politicians translate that into UK law? How will they handle the massive opportunity to restore nature as they’ve promised following British withdraw from the common agriculture policy? Can they direct some of the agricultural budget to catching water on farmland to prevent the floods we discussed earlier? How will they improve the chaotic waste and recycling policies and how will our next government solve the conundrum of persuading tens of millions of people to insulate their own homes as part of the supposedly inexorable drive towards the low carbon economy? The Conservatives’ ambition looks limited here compared with the Lib Dems, Greens and Plaid Cymru and also Labour who want to make home insulation an infrastructure priority. The SNP hasn’t published its manifesto yet but it too wants to take a strong line on climate change. Then how will the parties deal with the thorny issue of air pollution? Policies are there in other manifestos but details are strikingly absent from the Conservative document, presumably to avoid upsetting diesel drivers. So many environmental questions still, so many unanswered. 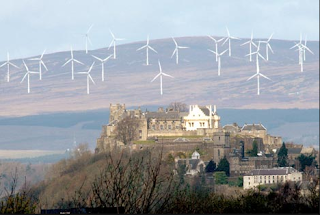 Roger Harrabin's language is extraordinary, isn't it? Besides the hyperbole, there's also the loaded use of the negative word "beset" with regards to Brexit. Then there's the disgraceful linking of 'Brexit' with 'terrorism'. Then there's the use of the dubious term 'refugee crisis' rather than 'migrant crisis'.

That's three patent examples of BBC bias in just one small part of a single sentence.

There's also the 'argument from authority' (starring non-climate scientist Stephen Hawking). And the repeated blaming of 'the right-wing media'. And Roger's talk of "angry" UKIP and conservative types (driven by irrational emotions it seems). And that non-by-the-by use of the term "by-the-by" to dismiss scepticism about renewables. (And I'm betting that more than 1% are infuriated by wind farms despoiling landscape after landscape).

And there's the use of the word "legitimised", which is invariably used by the BBC to describe a common view that's unacceptable (to them) but which has become more visible (to them).

Then there's the traducing of UKIP and Conservatives at the expense of the Greens, Lib Dems, Plaid, the SNP and Labour - and, yes, he really does have a right good 'snark' at the Tories in this piece, again and again.

So, in conclusion, by what criteria could anyone possibly consider this a piece of impartial broadcasting?

I'm genuinely totally at a loss to guess. If anyone can explain it to me I'd love to hear their explanation.
Posted by Craig at 21:43