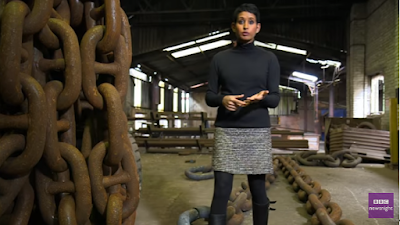 Meanwhile, Naga Munchetty, still on her short break from BBC Breakfast, has now produced three Brexit-related reports for Newsnight. (All are posted on Newsnight's YouTube page).

The first, back in February, was a negative piece (which we reviewed here). It argued, contrary to what "prominent Leavers" claimed, that the UK outside the EU single market and Customs Union could "face the very real prospect of moving down the pecking order when it comes to Germany's favoured trading partners".

The second, back in March, looked at UK farming post-Brexit. It included four farmers, three of whom were for Remain, only one for Leave. Though less relentlessly gloomy, this imbalance still led to a heavy predominance of negativity.

And finally, this week, came the third. And it was straight back to the unremitting heavy negativity. Here's how it was introduced:

Could it be that it's not just free movement of people that could end with Brexit, but free movement of parts? The supply chains of the UK's manufacturers, for example, snake all over the continent, where components are routinely sent back and forth to be worked on. Now there are concerns that those supply chains could be disrupted after we leave the EU, costing time and of course money. Naga Munchetty has been talking to people in the manufacturing industry about how they're preparing for Brexit.

The tone didn't improve much from there.

Please watch them for yourselves and see if they strike you as a body of impartial broadcasting work from Naga and Newsnight.
Posted by Craig at 13:16