Cornwall has been in the news a lot recently, and not necessarily in a good way.
The other day we heard about Theresa May apparently shutting out local journos during her whistle-stop visit to Water-Ma-Trout industrial estate in Helston.
We watched John Sweeney doing his puerile  ‘in pursuit of Andrea Leadsom’ sketch  and then we had Howard Jacobson’s A Point of View on Radio 4.

In the middle of the piece he gave us an analogy based on a brief  and unhappy period when he lived in Cornwall.
I realise this whinge about being an ‘outsider’ was designed to make us reflect upon our mean, selfish and racist attitude to mass immigration and our ‘fear of the stranger’. However he is way behind the times with this analogy.

I can assure you that over time the zeitgeist in Cornwall has evolved from what one might uncharitably call ‘insular’ to the burgeoning aspirational and cosmopolitan ambience of the present day. (Not to ignore pockets of shabbiness and poverty or the alarming number of tacky, high density new-build developments and year-round traffic jams.)

In effect, Cornwall has been ‘discovered’ by the rest of the country, and while people like Howard Jacobson come and go, many others, celebrities and townies alike, come, settle and gentrify. It’s immigration Jim, but not necessarily as you know it; though I hear there’s a mosque in Truro.
What’s more, the Cornish go to concerts, frequently eat kale and quinoa and they even tolerate a Polish shop or two. There’s a World Food section in Tesco; and by the way, intransigence is not unique to the Cornish.

You don’t hear people say ‘emmets’ these days, but it wasn’t actually a word for ‘strangers’ in the first place. It’s a term the caricature-Cornish would use for ‘visitors’, i.e., holiday-makers, whose resemblance to ants was purely in the numbers invading the county during the school holidays.

If the Cornish really did treat Howard Jacobson with suspicion, I bet it was due to his city-person baggage, an aura of ‘street-wise’ wariness that’s redundant in the far South West. Perhaps it’s unintentional, but Londoners and city-dwellers often give off an uptightness and aloofness that  comes across as superiority and signals an unwillingness to integrate.

‘Incomers’  tend to wear special outfits, which they’ve bought specially for the country. Waterproof capes, Barbour coats and deerstalker hats. You can spot them from a distance. 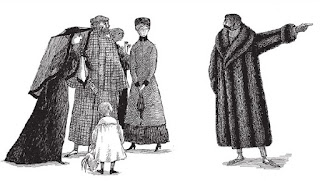 Howard Jacobson has a way with words. I am truly in awe of the eloquence with which he tackles anti-Israel bias, but this time he badly missed the mark.
Posted by sue at 13:15