What they really really want

Psssst. Pass the word to the BBC. (Does Theresa May watch the BBC?)

Anyway, it’s not much of a secret. Islamists are quite clear about what they want. In the immortal words of a baffled Very Reverend Dr John Hall, Dean Of Westminster, responding to Khalid Masood's act of Jihad on Westminster bridge:

‘What could possibly motivate a man to hire a car and take it from Birmingham to Brighton to London, and then to drive it fast at people he had never met, couldn’t possibly know, against whom he had no personal grudge, no reason to hate them, and then run at the gates of the Palace of Westminster to cause another death? It seems likely we shall never know.’

So, what do the Islamists want?

In the immortal words of the Spice Girls:

Okay, so it’s not ‘all Muslims’. How to differentiate between Jihadis and your common or garden member of the Muslim community? Maybe the propensity to wage war against the unbeliever and fight for Allah is merely a matter of degree? The word ‘extremist’ suggests that is the case. So where  and when does the one become the other?

If you take the nastier Koranic dogma out of the Muslim, do you still have a Muslim?

Remember  all those angry Muslims’ demonstrating in democratic  London with placards emblazoned: “Down with Democracy!”. 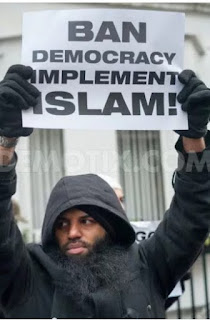 Perhaps compatibility with Western values could be determined by how the individual regards democracy?
For me, hatred of the non-Muslim would be a factor. Criminal gangs and antisemitic politicians and community leaders may not be hard core Jihadis, but Muslims who regard me and my fellow unbelievers as inferior are far more damaging to ‘social cohesion’ than any amount of politically incorrect speech.

By the way, I thought Suzanne Evans stood up to Andrew Neil quite well today.  John Prescott is from another era. Talking of other eras, Prescott’s ears are completely flat, I suspect they are trompe l’oeil. Ukip’s manifesto had a lot going for it, apart from the nigh impossibility of carrying out her immigration policy. On that Prescott almost had a point. 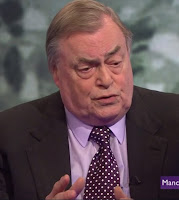 Andrew Neil can be hopeless. Short-tempered and dismissive rather than ‘forensic’. Don’t forget his poor performance with Tommy Robinson.  No, the whole of the BBC, and nearly all our current  MPs are deaf to the truth. “They” - the Jihadis -  keep telling us, in word and deadly deed, but they just won’t listen. Cloth eared, all.