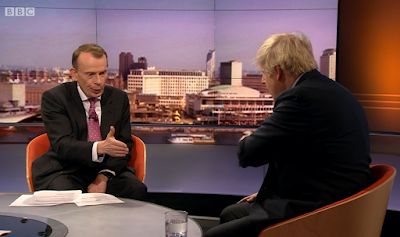 The Christmas edition of The Spectator also features a Broadcaster's Notebook by Andrew Marr in which he admits that he didn't see the scale of Boris's majority coming and that he was "over-influenced by social media".

Now, it's all very well pointing the finger of blame at Twitter and Facebook but people choose who they follow on Twitter  and Facebook, and usually do so by following their own biases and inclinations. So if their social media feed turns out to be an unrepresentative echo chamber which then gives back a false, misleading picture of public opinion as a whole then, frankly, such people (including Andrew) only have themselves to blame.

Anyhow, I believe that Andrew was more "over-influenced" by media closer to home - i.e. the broadcast media, especially his own BBC bubble. When he mocks "addicted Twitterati" for obsessing about election froth (such as Boris grabbing a reporter's phone or hiding in a fridge or refusing to be interviewed by Andrew Neil) and assuming that the nation is also transfixed by such 'game-changers', he ought to also be mocking the BBC, Sky, Channel 4, etc, as they went just as overboard on those stories.

Andrew Marr also uses his Spectator column to comment on Boris 'coming after' the BBC and, possibly, decriminalising non-payment of the licence fee goes. "I hope he doesn't", says Andrew. Hmm.

He then speculates on Boris's motives and says, "I hope it’s not because I frequently interrupted him the last time he was interviewed on my show". He then goes on to defend that interview, blaming its lack of elegance on Boris.

And he also praises John McDonnell:


But I take as I find. And I have always found him attentive, polite and prepared to answer hard questions in clear language.

We have, of course, commented several times before on Andrew Marr's oddly good-natured interviews with the faux-cuddly shadow chancellor, including the strange fact that Mr Marr often takes his dishonest words at face value. Now we know why: because he respects him. (Unlike Boris).
Posted by Craig at 09:53