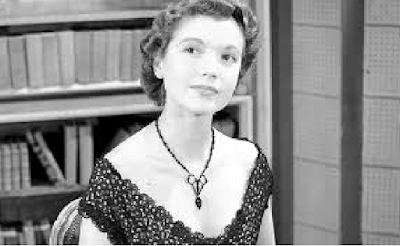 I was an impressionable adolescent in austere post-war Britain.
She was the most beautiful woman I had ever seen;
even if the technology did project her in a garish radar green.

Unﬂattered by an ex-War Department cathode ray tube
her ball gown image was nevertheless sumptuous, sublime;
she was the Joan Bakewell, the Angela Rippon, the Anna Ford,
the Natasha Kaplinski, the Fiona Bruce of her time.

Television sixty years ago was so very, very new
we had to stand up and look down to view; the screen face upwards,
installed in a box over a tangle of wires and valves
by a clever Do-It-Yourself garden shed engineer I knew.

Hearts ﬂuttered when she appeared on behalf of the BBC to greet us;
the identity of this Green Goddess?
according to the Radio Times she was Miss Sylvia Peters.