Is Fiona Bruce a racist? 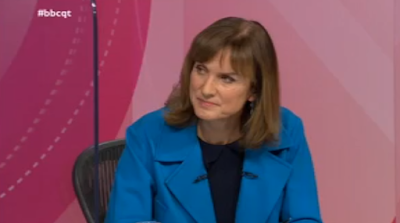 There was an uncomfortable moment for Fiona Bruce on last night's Question Time when she asked the Muslim former Chief Crown Prosecutor for NW England Nazir Afzal to answer a particular question first and he scored a point about racism off her at her expense:

Fiona Bruce: Let's take another question. From Julian. Julian Lee.
Julian Lee: With the revelations from cricket's Azeem Rafiq and footballers still taking the knee, what does this say about racism as a continuing undercurrent in present-day Britain?
Fiona Bruce: Nazir?
Nazir Afzal: The brown person will answer first. [AUDIENCE LAUGHTER].
Fiona Bruce: Nazir, so do you think that was wrong of me to come to you first?
Nazir Afzal: I think so. I think...
Fiona Bruce: Well, let's not do it then. Jordan? I don't mean...I'm not being sarcastic at all. I mean, if that is how you feel, I respect that. Let's go to Jordan.
Nazir Afzal: I do...[indecipherable]
Fiona Bruce: Well, that's a fair point, I will come to Jordan.