''You gotta be kidding me''

I spotted a tweet from the BBC a few days back: 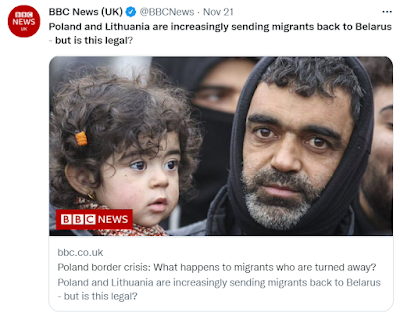 When you see the BBC asking a question like that on this kind of subject you can guess the answer they'll give before you even click on the article.
The article itself is a joint venture between the BBC's Paul Adams and BBC Reality Check and it rules that the actions of Poland and Lithuania aren't legal.
Incidentally, the tweet, one of the images within in the article, plus the thumbnail of the embedded video all show children. As someone I follow observed, ''The BBC do like their child pics''.
Meanwhile, the Polish government is not impressed with the BBC. Government spokesman Stanisław Żaryn tweeted:

Dear @BBCWorld, @BBCNews, this piece is full of bias! Why aren’t you putting any pressure on the Belarusian regime? You are fully aware that it’s Lukashenko who's playing with the fates of those people, aren’t you? Minsk is cynically using the migrants only for its political purposes. Those foreigners came to Belarus upon a mandatory invitation issued by state authorities, and on tourist visas. And now they want to illegally cross the Polish border. What we’re dealing with here is nothing but a hostile political operation controlled by the Belarusian services, incl. the KGB. And you're implying that Poland should be criticized? You gotta be kidding me.