Also as per Charlie's comment, Ofcom reports that audiences “consistently rate the BBC less favourably for impartiality” than they do on any other measure and that many viewers and listeners don't believe that the BBC obeys impartiality rules. 55 per cent of BBC television news viewers rate it very highly  - a figure which strikes me as surprisingly high.
Ofcom was also critical of the BBC’s lack of transparency over its complaint process. Ofcom wants the BBC to be more transparent, especially over its complaints process, as the corporation doesn't give details of rejected complaints. Ofcom says: “Given the importance of the BBC to many people in the UK, we have consistently called for the BBC to be more transparent. For instance, in how it explains its decision to the public.”
I'd add that they're getting very tardy at adding to their Corrections and Clarifications page. It's well over a month since they last publicly corrected or clarified anything, the last time being about ragworts on 20 October...

In honour of which fact, and though the BBC's Mark Bell might disapprove...

John Clare, The Ragwort (1832)
Ragwort, thou humble flower with tattered leaves
I love to see thee come & litter gold,
What time the summer binds her russet sheaves;
Decking rude spots in beauties manifold,
That without thee were dreary to behold,
Sunburnt and bare - the meadow bank, the baulk
That leads a wagon-way through mellow fields,
Rich with the tints that harvest's plenty yields,
Browns of all hues; and everywhere I walk
Thy waste of shining blossoms richly shields
The sun tanned sward in splendid hues that burn
So bright & glaring that the very light
Of the rich sunshine doth to paleness turn
& seems but very shadows in thy sight. 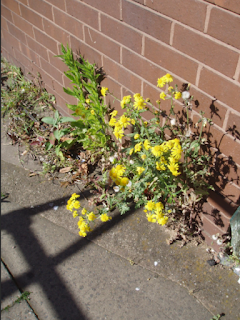