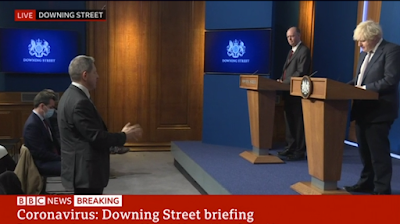 Madeline Grant of the Telegraph has, I think, the driest take on today's Boris-led Downing Street Omicron Press Conference where the journalists from the BBC, Sky and ITV all asked basically the same question - the same question they've all been asking for well over a year now:

One can't help but admire the persistence of these lobby journos, who plug on with their "Why aren't we going harder?" / "Plan B now!" questions, even after they've already been posed by about 15 other people at the same press conference. True grit and determination. Reminds me of turning up at uni tutorials having not read the book, and someone else in the class has used your one talking-point, so you have to make it again but using a slightly different form of words.