Almost as unsurprising as learning that the 'Christian convert' who attempted to kill so many on Remembrance Sunday has been a regular mosque-goer since April was the news, broken yesterday by The Times, that man-of-the-moment Azeem Rafiq - the cricketer making 'powerful' allegations of racism slurs  by Yorkshire Cricket Club - himself made racist slurs in 2011, in this case about Jews.
I watched the BBC News Channel's early reporting of story and BBC journalists and ex-BBC journalists went into defensive mode straightaway, insisting that those antisemitic tweets by Mr Rafiq didn't undermine his 'powerful' testimony to Parliament this week and shouldn't deflect from the wider story of racism in cricket.
And the BBC News website's piece on the story went through various revisions to cast Azeem Rafiq's slurs as 'historical' and something everyone [especially Jews] agrees he's now transcended by 'sincerely apologising' and through all he's been saying recently.
I see though that the whole 'racism in cricket' story has now dropped out of the main headlines - finally, after nigh on two weeks of relentless 'headline news' coverage. It will be back though in a day or so no doubt.
Update: And it now emerges that he made a racist gibe on Instagram about Africans in 2017, only 4 year ago. when he was no longer 19. The BBC was making much of the fact that these slurs were 'historical' last night. The word cropped up on their website and on last night's News at Ten. And the News at Ten twice mentioned that he was 19 at the time of the antisemitic slurs. By my reckoning he would have been 25 when the racist slur about Africans was made. [We aren't allowed to call any of this stuff 'banter' of course].
Further update [9.00am]: It didn't take long. This is now a main headline: 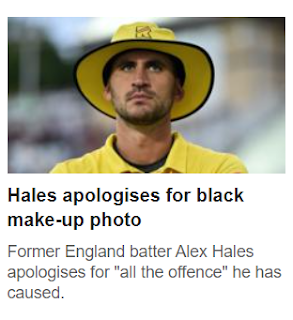 Patrick O'Flynn: A cricketer dressing up as someone from a different race for a fancy dress party in 2009 is leading the news. That's utterly absurd. Our broadcast media is clearly being run by left-wing ID politics addicts and activists.

Tim Montgomerie: I couldn’t agree more. The news isn’t the news anymore. It’s become McCarthyist with its daily search to identify and destroy “racists”. Foreign news, other social ills like loneliness and family breakdown all eclipsed by this obsession. The BBC has lost the plot.

Patrick O'Flynn: Now R4 has just led its second bulletin in a row about the cricketer and the 2009 fancy dress party. It's abandoning any claim to be funded via a licence fee in real time today. It's now an ID politics campaign.

I see the BBC online report has solved the Azeem Rafiq problem by continuing to cite his 'evidence' while briefly tagging on a mention of his antisemitic language [but not the bit about Africans] at the very end of the article.