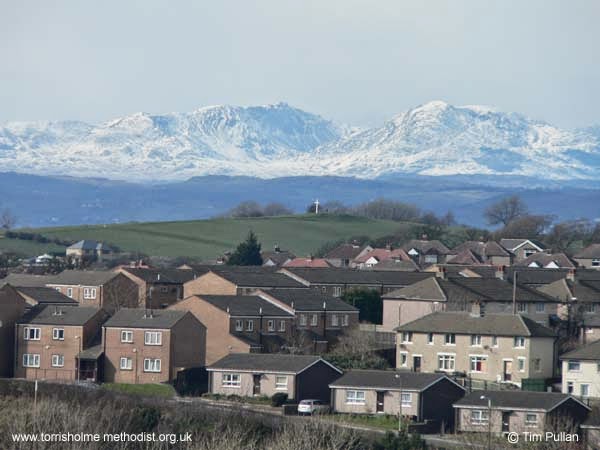 It was a lovely, sunny Friday today here in Morecambe, which is good - especially as I was off work.

I took the family out for a walk towards Torrisholme Barrow, a Bronze Age burial site with spectacular panoramic views, as they might say in tourist brochures - if such brochures ever bothered to mention such things [which in Morecambe they don't.]

As this Friday was Good Friday, the locals performed their annual procession of the cross through the village of Torrisholme [a village that pre-dates the Norman Conquest] up onto the barrow.

As they were coming back down we went up, arriving at the cross at midday. I found that strangely satisfying, on many counts.

Why am I telling you this? God alone knows, but I've been sunning myself all afternoon and chatting all evening and have nothing BBC bias-related to write about, so this is all I've got.

Such are the problems faced by bloggers, and their readers. Famine and feast. Apologies.

Still, here's something BBC related for you. It's the BBC website's account of why Good Friday is called Good Friday, and it's rather good - if short.

It is the day when Christians commemorate Jesus Christ's crucifixion. So why is it called Good Friday?
According to the Bible, the son of God was flogged, ordered to carry the cross on which he would be crucified and then put to death. It's difficult to see what is "good" about it.
Some sources suggest that the day is "good" in that it is holy, or that the phrase is a corruption of "God's Friday".
However, according to Fiona MacPherson, senior editor at the Oxford English Dictionary, the adjective traditionally "designates a day on (or sometimes a season in) which religious observance is held". The OED states that "good" in this context refers to "a day or season observed as holy by the church", hence the greeting "good tide" at Christmas or on Shrove Tuesday. In addition to Good Friday, there is also a less well-known Good Wednesday, namely the Wednesday before Easter.
The earliest known use of "guode friday" is found in The South English Legendary, a text from around 1290, according to the dictionary. According to the Baltimore Catechism - the standard US Catholic school text from 1885 to the 1960s, Good Friday is good because Christ "showed His great love for man, and purchased for him every blessing".
The Catholic Encyclopedia, first published in 1907, states that the term's origins are not clear. It says some sources see its origins in the term "God's Friday" or Gottes Freitag, while others maintain that it is from the German Gute Freitag. It notes that the day was called Long Friday by the Anglo-Saxons and is referred to as such in modern Danish.
It also says that the day is known as "the Holy and Great Friday" in the Greek liturgy, "Holy Friday" in Romance Languages and Charfreitag (Sorrowful Friday) in German.