Have I Got News For UKIP? 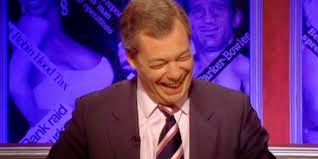 Last night's Have I Got News For You launched a full-scale humour assault on Nigel Farage, UKIP and UKIP voters.

Nigel Farage himself was present as this particular roasting, and laughed and groaned his way through punchline after punchline at the expense of his own expenses and his (alleged) ex-marital activities, a round called 'Fruitcake or Loony?', plus various jokes about racism and homophobia, mostly read out by actor Stephen Mangan.

I note that many UKIP supporters took to Twitter to denounce the BBC's left-wing anti-UKIP bias. Given that they, their leader and their party had been the butt of most of the programme's jokes, it would have been surprising if they hadn't. Funny old world, Twitter, though because anti-UKIP left-wingers also took to Twitter, either to praise the BBC for 'ripping UKIP to shreds' or to denounce the BBC for inviting Nigel Farage onto the show in the first place ('right-wing bias'). As I say, funny old world, Twitter.

Similarly, the HuffPost and the Independent may be gloating about Nigel Farage's slating on the show but many of the BTL commenters on those sites are saying that the UKIP leader did himself no harm whatsoever by entering the ultimate lion's den for a right-wing politician - a BBC studio with a baying audience - and pretty much managing to maintain his cool and good humour throughout.

Indeed, I doubt that a single BBC viewer would have changed their view of Mr Farage and UKIP after watching that show. Those who love him will have admired his guts for going on the show, laughing his way through its relentless assault on both him and his party: The plucky outsider, hated by the political establishment, bravely sitting in the stocks as deeply-personal allegations are flung in his face like tabloid tomatoes. Those who hate him and his party, on the other hand, will think he/they deserved all he/they got, even if they don't think he should have been invited on in the first place. They will hope that some of the thrown tomatoes will stick to him, and damage him. (I very much doubt that though).

HIGNFY still gets a decent audience each week, even after 47 series. It's no longer the 'must see' programme it used to be for me though, even though its still makes me laugh from time to time. Its targets though remain utterly predictable.

There wasn't a single joke about Ed Miliband, the present-day Labour Party, the Guardian, Tristram Hunt, the BBC, Barack Obama, or the Green Party, etc, but then again that's BBC comedy for you!
Posted by Craig at 14:08

Labels: 'Have I Got News For You', UKIP