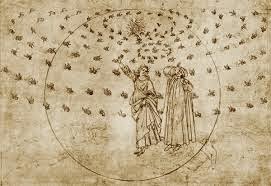 I hate being a perennial sourpuss when it comes to blogging, so I'm going to recommend that you make an effort to catch the third and final part of Radio 4's most recent Classic Serial, Dante's Divine Comedy, Paradiso, while you can.

Failure to do so will see you damned for all eternity. After all, the sign at the entrance to Hell reads, "Abandon hope all ye who failed to catch Paradiso on Radio 4."

You can listen at 9 o'clock tonight [now] or on the i-Player for the next nineteen hours.

The whole thing, as adapted by Stephen Wyatt and narrated by John Hurt, was staggeringly good.

I will confess (as it's Easter Saturday) that I read everyone's favourite part of the Divine Comedy, the Inferno, many years ago, and continued half way up Mount Purgatorio before giving up (and tumbling back to Hell). The joys of Paradiso remained untasted, until this week.

Beautiful poetry, thanks to Dante; interesting background information, thanks to Stephen Wyatt; fine performances; and gorgeous music too. (I recognised snatches of the Messe de Notre Dame by the greatest of all medieval composers, Guillaume de Machaut).

I haven't heard anything as good as thing on the radio for years and I'd willingly subscribe to the BBC if they kept doing things like this.

And they very well might, as tomorrow's Classic Serial is Ring for Jeeves, with Martin Jarvis as Jeeves.

Martin Jarvis's recent solo readings of P.G. Wodehouse's Jeeves stories on Radio 4 have been another recent treat (and one that I probably ought to have mentioned earlier).

Despite the years of gentle teasing he had to put up with, thanks to the team responsible for Dead Ringers, the man is an acting genius ("He Do the Police in Different Voices"), and if you ever get a chance to hear him reading Wodehouse don't miss it!

In anticipation of tomorrow then, Happy Easter!


P.S. Talking about subscribing to things, I'm now a subscriber to The Spectator, on the grounds that they deserve a little financial support. And I'm not regretting it.

Among the many fine articles there - including Mark Steyn's glorious rallying cry in defence of free speech (oh, why isn't he a regular of Radio 4's A Point of View?....he asks, rhetorically) - is a piece by Christopher Booker on 'the greatest picture in the world', Piero della Francesca's Resurrection.

It is a magnificent painting, as you can see below. 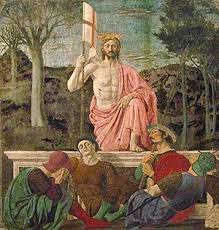