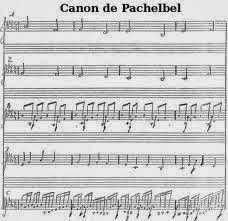 The theme of this morning's Something Understood (Radio 4, Sunday) was repetition.

It began with 17th Century composer Johann Pachelbel's famous Canon, in which a variety of evolving melodies unfold over a constantly repeated pattern of eight notes. Presenter John McCarthy (who knows more than most people about repetitive days) then noted that our days are full of repetition. We get up, eat breakfast, go to work, come home, chat to the family, eat a meal, cruise the internet, watch TV and go to bed. Like those eight notes underpinning Pachelbel's Canon, these daily doings provide the dull-seeming ground bass over which the evolving events of our day proceed.

Listening to Something Understood seems to have become part of my weekly ground bass, and the comfortingly repetitive formula of each episode allows for a huge amount of variety (in content and quality). At its best it gets you thinking, maybe even penning slightly pretentious blogposts about it.

Music is the art form that seems to rely most on repetition, whether in be a Sibelius symphony or a David Bowie song. That repetition can be found inside the piece of music - a recurring motif, a catchy chorus, a repeating chord pattern, a nagging bass line - or it can come from the experience of repeatedly listening to the same piece of music over and over again (by choice). I think I've listened to Holst's The Planets well over a hundred times over the years and I never tire of hearing Heroes or Ashes to Ashes by David Bowie, again and again. Then there are the tunes that get lodged in our heads and that keep coming round as we sit, performing some mundane task.

Of course, sometimes repetition in music can be boring, tiresome, and dispiriting. Keep hearing a song you dislike and it's not dissimilar to repeatedly having to perform a task at work that you dislike. Some people find minimalist music, such as Philip Glass's operas, to be hypnotic, others duller than a year's worth of editions of You and Yours.

Each to their own of course (as over You and Yours too).

Our enjoyment of repetition may explain why contemporary classical music (Schoenberg, Boulez, Birtwistle, etc) may hold so little appeal for most listeners. If those listeners repeatedly re-hear those composers' pieces of music, however, then dislike might - just possibly - change to like due to the power of repetition (or, perhaps, brain-washing).

If you fancy a short experiment to see if that's true or not, perhaps try listening to Anton Webern's short Symphony several times and see if you change your view of it (or to the links to the three modernists listed in the last paragraph). 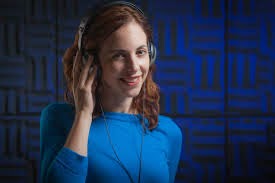 An interesting experiment (of the scientific kind) which backs this up is described in an article I was reading recently by Professor Elizabeth Hellmuth Margulis (above):


Can music exist without repetition? Well, music is not a natural object and composers are free to flout any tendency that it seems to exhibit. Indeed, over the past century, a number of composers expressly began to avoid repetitiveness in their work. In a recent study at the Music Cognition lab, we played people samples of this sort of music, written by such renowned 20th-century composers as Luciano Berio and Elliott Carter. Unbeknownst to the participants, some of these samples had been digitally altered. Segments of these excerpts, chosen only for convenience and not for aesthetic effect, had been extracted and reinserted. These altered excerpts differed from the original excerpts only in that they featured repetition.

The altered excerpts should have been fairly cringeworthy; after all, the originals were written by some of the most celebrated composers of recent times, and the altered versions were spliced together without regard to aesthetic effect. But listeners in the study consistently rated the altered excerpts as more enjoyable, more interesting, and – most tellingly – more likely to have been composed by a human artist rather than randomly generated by a computer. The listeners in the study were college undergraduates with no special training or experience in contemporary art music.

Even so, when I presented these findings at the annual meeting of the Society for Music Theory in 2011, to an audience that was uncommonly well-versed in these repertoires, some people were surprised to find that the doctored versions possessed an elevated degree of persuasiveness, even to them, and even when they knew what they were hearing. Admittedly, this study does not address the specially cultivated listening habits of the cognoscenti, but it does reveal something about the way listeners make sense of music that is new to them. Repetition serves as a handprint of human intent. A phrase that might have sounded arbitrary the first time might come to sound purposefully shaped and communicative the second.

Of course, this blog is prone to repetition and repetitive cycles.

Whether you find that endearing - or otherwise - is entirely your own affair!
Posted by Craig at 11:13