This morning's Sunday on Radio 4 was an Easter Sunday special from Belfast, presented by William Crawley.

Its themes were (1) the criticism of the government for failing to include the Church in plans for the future of Northern Ireland, (2) the dangers of commericialisation at Easter, (3) the role of faith groups in Ukraine, (4) the rise of Islam in N Ireland, (5) food poverty, (6) the legacy on the ground of the Good Friday agreement, and (7) the question of whether there should be an amnesty for those involved in the Troubles - a range of familiar and expected Sunday topics, I'm sure you'll agree.

Here's what happened (with the blurb from the Sunday website in bold italics).

1. Bishop Harold Miller of the Church of Ireland has said the absence of the church in the plan for the future of Northern Ireland is "regrettable"

William introduced the Bishop of Down and Dromore as being critical of the government over this issue. Bishop Harold expressed himself far less aggressively than that might suggest, regretting the absence of the church's role, suspecting that it may be that - due to past history - the church is seen as part of the problem rather than part of the solution, and expressing the belief that the church can very much be part of the solution.

2. Also as the Church of England launches a twitter campaign #EasterMeans, Kevin Bocquet asks What is the meaning of Easter?

Kevin reported (as the programme so often does now) from Manchester. Linda Woodhead of Lancaster University (a 'Sunday' favourite) was his expert 'talking head.' She wasn't particularly concerned about the issue of commercialisation of Easter [the actual theme of this report]. Kevin pointed out a "posh chocolate shop" selling a £75 Easter Egg before speaking to various vox pops in Manchester, asking them what they think of when they hear the word 'Easter'. The answers came: chocolate,, Easter Eggs, shopping, "having to go to church" and "Jesus" (a Catholic). Not many seemed to be intending to go to church.

In the middle of the Arndale Centre he met Rogers Govender, Dean of Manchester Cathedral, who was cleaning the shoes of passers-by, in imitation of Jesus's washing of feet. The dean wasn't particularly bothered that people are shopping either, but Kevin kept worrying away about the billions of pounds that businesses make at Easter. Linda Woodhead said that religion has always been commercialised, reminding us about the money-making that surrounded relics and pilgrimage sites in the Middle Ages.

Larger shops are not allowed to open on Easter Sunday. Stephen Springer, a retail analyst, said that this irritates them, especially as online shopping is growing and proving both popular and profitable. Technology is undermining the ban.

Finally, Fr Paul Canon from Salford, a Catholic, agreed that they have to interact with the secular society, and wasn't that bothered about commercialisation either. An active church will lead to its higher profile, he argued. 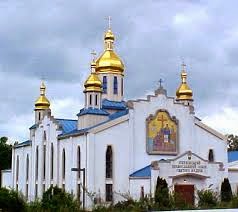 3. And from the Ukraine we speak to Sergei Golovin a scientist and pastor speaks to William ahead of his Easter service in Chernivtsi.

There must have been a last-minute change of plan here, as Fr Golovin was dropped and the Lib Dem MP Simon Hughes took his place. He's just come back from Ukraine. He says that people there are grateful for British & EU interest in them.

4. And we explore the rise of Islam in Belfast

Oh yes, it's 'the world's fastest growing religion' time, and it's now growing in Northern Ireland, with the number of Muslims there doubling in the past decade.

William went to meet a man who came from Turkey in 2009, settling in Belfast. He's happy, but... Prompted by William, he said that if he were more visibly Muslim he'd face more problems (he's relatively light-skinned) especially as his wife wears a headscarf and has had some problems). He says Muslims are "still outsiders" there. William suggested they might need a bigger mosque. They've been trying for one for years, came the reply. 'Will Muslims face problems if one is built?', William wondered.

Then he went to the Belfast Islamic Centre to meet a man who grew up as middle-class Irishman in Belfast, with links to Republican politics and a traditional Catholic upbringing. He has now converted to Islam, complete with beard and traditional Muslim clothes. "Have you experienced discrimination here?" asked William, pushing the same angle he'd been pushing throughout.

5. As new figures released by the Trussell Trust demonstrate the extent of food poverty in the UK William asks what that means for the people of Northern Ireland with Rev Kevin Graham from the Church of Ireland and Cormac Wilson - Regional Senior Vice President, Society of St Vincent de Paul.

Though the government strongly disputes the Trussell Trust's figures, that didn't stop the 'Sunday' website from asserting that they "demonstrate the extent of food poverty in the UK" or William Crawley from asserting, "This week we learned there's been a MASSIVE increase in people receiving food handouts", saying the numbers have "practically doubled".

Shouldn't 'Sunday' be less assertive when dealing with such a hotly-disputed political issue?

Rev Kevin Graham said that 11,697 came to food banks in N Ireland, a five-fold increase. Cormac Wilson said "there's been a great increase in need". Kevin blamed static incomes, zero hours, welfare sanctions and the public sector pay freeze. "I would be in total agreement", said Cormac. Kevin wants fairer welfare reform, and William invited him to expand on what the government should be doing. He said they should bring in a living wage and social energy tariffs, "It's obviously a worsening problem," said William.

Someone from the government, someone sceptical of the Trussell Trust's figures or someone who doesn't think that there's a food poverty crisis in this country at all really should have been invited on for the sake of balance. [This being 'Sunday' though that was always unlikely to happen. It's an subject area where balance rarely ever seems to even enter into 'Sunday''s collective head].

6. In a special Easter programme from Belfast, William meets Baroness May Blood asking how Northern Ireland has changed since the signing of the Good Friday agreement.

William talked to Labour peer Baroness Blood, beginning with the issue of peace walls. She hopes for "a Belfast without peace walls", One is very near to her home. It was built in 1994, the day of the IRA ceasefire, "The million pound wall", it's called, and - like other peace walls - it's now a tourist attraction. ("Troubles tourism", William called it. Baroness Blood didn't seem too bothered about that).

He talked to her on Good Friday. She says that politically, Northern Ireland is "not much advanced" since then.

What of faith? "Faith doesn't seem to have the same respect" these days, she said. There are 29,000 people in the Shankill area. Only 3% go to church now. She said that's partly because the province is becomingmore secular, partly because of the growth of new, community churches, away from established churches. She says it's very rare to hear priests being called "reverend" now, and that they're usually called by their first names. (She still addresses them formally though).

Will Easter Sunday ever happen, politically in Northern Ireland?, William asked. Not in her lifetime, she replied. 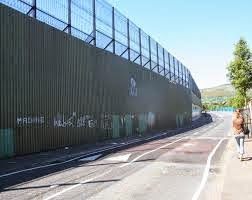 7. Two victims of the troubles Jude Whyte and Ann Travers debate on how best to deal with the past in Northern Ireland.

The question here was: Should there be an amnesty? After all, sacrifice, forgiveness, reconciliation and a new beginning are the messages of Easter, said William.

Both guests, well-known in Northern Ireland, lost relatives to terrorists in 1984. Jude Whyte is in favour of an amnesty, hoping it would pave the way for a truth & reconciliation forum. Ann Travers, in contrast, believes it's wrong to take hope away from victims and opposes an amnesty, saying it would send the wrong message to present-day terrorists. William conducted this section as fairly as you would expect of someone will a huge amount of experience of handling this issue.

Update: As is his way, David Vance at Biased BBC has a pithier take on today's edition of Sunday:


I was up early this morning and tuned into the SUNDAY programme on Radio 4 presented by my old pal William Crawley. There was a story about how ISLAM was the fastest growing religion in the UK,  a story about the terrible “poverty” facing the UK that requires Food Banks and the like and a story about the need for an amnesty for terrorists in Northern Ireland. That was in about 30 minutes. The bias is so easy, so institutionalised, that it just flows out naturally.