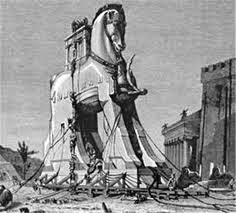 What with Monday night's Panorama on Luftur Rahman and last night's impeccably-hosted Nick 'n' Nigel debate, this has been an unusually fine week for the current affairs wing of BBC broadcasting - and Today added to that record this morning with its coverage of the 'Trojan Horse' story in Birmingham.

The story revolves around claims made in an anonymous (and possibly fake) document sent to Birmingham Council. It outlines a plot to oust non-Muslim head teachers and staff at state schools in Muslim neighborhoods and replace them with individuals who will run the schools according to strict Islamic principles. The authorities have launched an investigation into several schools in the Birmingham area, and even the likes of the Guardian and various Labour MPs are alarmed at what appears to be going on there (regardless of the authenticity of the document).

This is a story the BBC might well have downplayed in the past, but here it was on this morning's Today programme - and in the prestigious 8.10 spot too.

One of the schools at the centre of the allegations, Park View Academy, invited the BBC into the school to give its side of the story.

The chairman of the governors there, Tahir Alam, clearly tried to make sure it was the 'official' view, refusing to allow the BBC reporter, Sima Kotecha, to walk around by herself and speak to whoever she wanted to speak to; indeed, Sima made it clear that she was only allowed to speak to a few, selected members of staff, always in Mr Alam's company.

Sima noted that girls sat with girls and boys with boys. She pointed out a poster on a window of Pakistan's founder Muhammed Ali Jinnah and the school-trip photos, none of which show boys and girls together. She was also told that there's a loudspeaker in the hall which regularly plays the Muslim call to prayer (despite the school's claim to be an 'inter-faith school').

Mr Alam (a key player in the Muslim Council of Britain) denies the allegations and played the 'it's all anti-Muslim, anti-Islam' card.

The only non-Muslim member of staff Sima was allowed to speak to said that though girls and boys sit separately in assembly and that non-Muslim children may initially feel "shock" when they arrive at the school, they are "happy", and the pupils she spoke to outside the school had nothing bad to say about the way it is being run.

But then came the heart of the report:

But two members of staff who don't want to be named insist there is truth in the allegations. They say they have been in school assemblies where a viewpoint politically sympathetic to al-Qaeda has been promoted. A senior member of staff is said to have praised the now-dead Anwar al-Awlaki, who was one of the group's leading spiritual figures. The sources also say that non-Muslim staff are being isolated and nepotism is apparent in the school's recruitment process.

As Sima Kotecha said, if true those are very serious charges.

Khalid Mahmood MP seems to believe the Trojan horse allegations. He says all the governors at Park View Academy are Wahhabi and says that Mr Alam is all about recruiting more such governors and changing the ethos the school.

Yes, I think credit is due to Today for tackling this issue, and uncovering further evidence that the Trojan Horse claims have at least some truth to them.
Posted by Craig at 20:35