"You really call that a dog?"

I caught the closing minutes of this morning's Today programme, arriving just in time to hear Evan Davis giggling his way through an interview about the paintings of George W. Bush.

Nancy Durrant of the Times's various digs at Dubya - his record and his "boring" paintings - really seemed to tickle Evan's funny bone [or were his body piercings chafing him this morning?]

We learned that the former president is a Sunday painter, and not a very good one - which came as a great surprise to me as I thought, after two years, that he'd be at least as great as Francis Bacon, Lucian Freud, Graham Sutherland and David Hockney. If not better.

Nancy said she couldn't tell who this "yellow slab" represented at first: 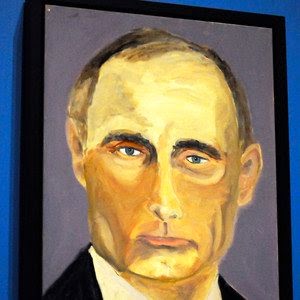 Now, I'm not a senior journalist at the Times but I think it looks a lot like that Russian guy. Unlike Nancy though, I've just been to Specsavers and have also been known to read the Times's world affairs section from time to time.  (Yes, it really does have more than a culture section, Nancy).

If you watch the NBC report by his daughter Jenna, you can see George telling an anecdote that Today only alluded to in passing - a very revealing (and funny) anecdote, I'd say, and one that Evan might have been better dwelling on. Still, leave it to the blogosphere to report the actual news rather than just sneering at George W. Bush!:

Vladimir Putin, yeah. I met with him a lot during my presidency. I got to know him very well. I had a good relationship throughout. It became more tense as time went on.

Vladimir's a person who in many ways views the U.S. as an enemy and, although he wouldn't say, I felt that he viewed the world as either 'the U.S. benefits and Russia loses' or vice versa. I tried, of course, to dispel him of that notion.

As you know, our dear dog Barney has a special place in my heart. I introduced him to Putin. Putin kind of dissed him and said, "You really call that a dog?"

A year later your mom and I go to visit Vladimir at his dacha outside of Moscow and he says, "You like to meet my dog?" Out back's this huge hound, obviously much bigger than a Scottish terrier, and Putin looks at me and says, "Bigger, stronger and faster than Barney".

I took it in. I didn't react. I just said, well, hang on, anyone who thinks 'My dog is bigger than your dog' is an interesting character. And that painting kind of reflects that. 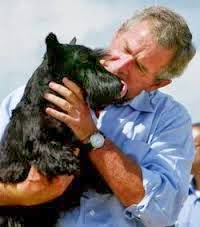 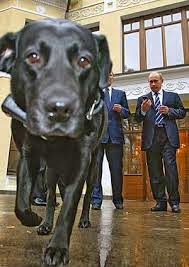