The final Newsnight this week dropped Ukraine from its prime position. The deal in Geneva was obviously not as exciting as the 'bang bang' earlier in the week [as Jeremy Paxman might put it], so into third place in the programme's running order it duly went.

Into prime position instead went the boring Westminster bubble story exciting Newsnight scoop that the Labour Party has hired West Wing star American strategist David Axelrod to help make Ed Miliband electable. If it worked for Obama, it's bound to work for Ed.

Even though Newsnight and Kirsty Wark were clearly excited, Laura K's report was slightly ironic in tone and featured just one talking head - Jonathan Freedland of The Guardian. His contribution was similarly ironic [and, I suspect, true]:

In a way I do think some of these American advisors are slightly taking candy out of the hands of a baby by taking this money, these people, big fat contracts to work for British political parties, cos the truth is they haven't run a parliamentary campaign, a nationwide parliamentary campaign, and their experience - though glamorous and fascinating - is very, very different. I'm not sure how much their wisdom is exportable to Britain, but it will certainly make those advisors and SPADs with their DVD collections of The West Wing feel thrilled when they get up to work in the morning, and that's why they want him here.

Next came another report on the Operation Trojan Horse affair in Birmingham.

It really is surprising that the BBC is playing an active part in reporting this story. It's not what I would have expected from them. From Channel 4 maybe, but not from the BBC.

Still, they have generally been treading carefully (as is their way), and Chris Cook's report for Newsnight was as over-cautious as can be. It went out of its way to balance all shades of opinion except those supporting the government's choice of a former anti-terror chief to investigate the matter. As a result it rather lost the plot (in more than one sense). 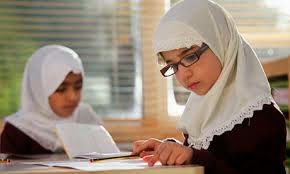 The report promised something new. A scoop. Newsnight had "discovered" something - new documents "that reveal concerns over extremism in one school were flagged up four years ago".

Amazingly little was made of this though. Chris Cook mentioned them, but didn't give us a good look at them or describe their contents in any great detail. It was a damp squib of a scoop, at least in the ultra-cautious way it was presented. What did the documents actually say, and why didn't Newsnight tell us?

If you set against this weak Newsnight report a piece of real investigative journalism - and a genuine scoop - such as Andrew Gilligan's Telegraph report this weekend, based on a leaked copy of an official report into the affair, you'll see the difference between nervous, don't-offend-anyone-from-a-sensitive-minority BBC reporting and proper, no-fear-or-favour investigative Telegraph journalism.

Talking of Muslims, Laura Kuenssberg then turned up in France talking to Marine le Pen, leader of the Front National.

The interview was a strange affair, conducted through an unseen/unheard interpretor yet appearing as if it was a normal interview, complete with terrier-like interrupting from Laura. How was this done? Were some of Laura's interruptions superimposed on some of Mlle le Pen's answers? Or did Laura interrupt despite not having a clue what Marine le Pen was actually saying? Or does Laura understand French, but Marine doesn't understand English?

Laura had two main lines of questioning, and stuck with them. Mlle le Pen told her that she seemed more interested in asking her questions than listening to the FN leader's answers.

Her main line of questioning was to ask about Mlle le Pen's view of UKIP, again and again. Why? Those suspicious of Newsnight's motives might well suspect an attempt on their part to smear UKIP by association. (UKIP has made it clear that there's going to be no deal with the FN because of its record on anti-Semitism.)

Her second line of questioning concerned Marine le Pen's "offensive" views on Muslims. Mlle le Pen's views sounded positively mild compared to some of the stuff many of us read online, but Laura put on a 'horrified' expression and interrupted. 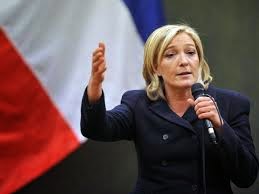 The response to this interview on Twitter was striking. Expressions of admiration and disgust for Mlle le Pen mingled, but almost everyone agreed on one thing - Laura was 'handed her ass on a plate' [or variants thereof]. Left-wingers despaired at the way Marine le Pen had outgunned poor Laura Kuenssberg here.

As we've said before, Laura isn't a natural interviewer. Sometimes that works to her (and our) advantage. When she's up against a formidable figure like Marine le Pen, someone well beyond the BBC's nice liberal comfort zone, she's likely to struggle and (as here) go under.

Still, at least she gave every impression of not liking Marine le Pen, so the BBC will forgive her.

From the Right to the Left next, as Newsnight marked the passing of yet another leading left-winger, this time the Nobel Prize-winning Colombian novelist Gabriel Garcia Marquez. Given that he has regularly topped polls of the 'greatest living novelist' among literary types, Newsnight's commemoration of his life and works was understandable.

No one spoke any ill of him, of course (even anything that might be true).

I have One Hundred Years of Solitude on my book shelf. I bought it, many years ago, for 50p in a second hand book shop, as I've always liked the sound of 'magic realism'. All I've now got to do is read it.

Ah, magic realism! Like listening to a nightingale singing as a cello plays the Londonderry Air, which is just how Newsnight played itself out on Thursday. Altogether now. 'Oh Danny boy, tweety-tweety-tweet-tweet, the pipes, tweet, tweet, the pipes, trilllllllll, are tweeting'.
Posted by Craig at 13:23