Has the BBC has found its latest bogeyman? 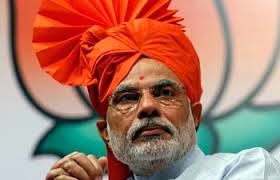 Various academics, artists and MPs [including Baroness Helena  Kennedy, author Salmon Rushdie, solicitor Imran Khan, Labour MP John McDonnell MP and artist Anish Kapoor] wrote a letter to the Guardian yesterday expressing their grave concerns at the prospect of Narendra Modi, leader of India's major centre-right party, the BJP, winning the current general election there. Newsnight led its coverage of the Indian election yesterday with that very angle, and one of the signatories, Pragna Patel from the Southall Black Sisters, was invited on the programme to air her concerns, alongside crossbench peer Lord Bilimoria. Ms Patel repeatedly slung epithets like "Hindu supremacist", "right wing" and "fascist" at Mr Modi, while Lord Bilimoria (evidently not an unqualified supporter of the BJP leader, though remaining cautiously optimistic about a new BJP-led government) trod a much more measured, far less adjective-strewn path.

And talking of adjectives....the preceding Newsnight report from the BBC's Tulip Mazumdar described him in the way all such bogeymen as described by the BBC: "deeply controversial and divisive".

Despite being repeatedly cleared by the Indian courts during the last ten years of Congress rule, lots of people still believe he did nothing to stop the massacre of around a thousand Muslims in Gujurat back in 2002, indeed that he may have helped whip up the anti-Muslim violence there following the deaths of several dozen Hindu pilgrims in a fire on a train, and both Tulip and Laura Kuenssberg made space for both viewpoints - the 'Modi is innocent' one and the 'Modi is guilty' one - but the angle chosen (in line with that taken by last week's Sunday) is not an unexpected one for the BBC.

The 'Narendra Modi is controversial' angle does seem to be the only one I've heard on BBC current affairs programmes. (I'm not an omnipresent BBC viewer/listener though!)

There was an episode of Beyond Belief a couple of weeks ago, for example, where all of Ernie Rea's guests laid into Narendra Modi and Hindu nationalism with a vengeance. I took that as a sign of where the BBC would be going with this story.

In contrast, the apparent deep disenchantment in India with the Congress Party, the flagging of the country's once-booming economy, and the strange story of latest scion of the Nehru/Gandhi dynasty, young Rahul Gandhi (Mr Modi's main opponent in the election), who seems unsure about whether he even wants the job, remain areas I've yet to hear explored on the BBC's airwaves in the run-up to this election. (Have you heard such discussions?)

Tonight's Profile on Radio 4 certainly won't be profiling Rahul. No, it's going to be Narendra Modi instead:

Narendra Modi is tipped to become the next Prime Minister of India but he's a controversial character, both loved and loathed. In this edition of Profile, Ritula Shah travels to India to find out more about the son of a tea seller who has become a formidable politician. She speaks to the brother he left behind and the tailor who gives him his signature style.

...which echoes Newsnight's introduction to the story last night:

He's certainly loved, but also loathed. India's voters look likely to choose a man some believe has dangerous charisma. So who is the politician at the centre of Modimania?

Has the BBC has found its latest bogeyman?


Update: Having just listened to Palestinian Solidarity Campaign patron William Dalrymple's A Point of View on Radio 4, this feeling that the Beebosphere has found a new Emmanuel Goldstein to hate has become even firmer. William Dalrymple expressed "a deep sense of unease" at the prospect of Narendra Modi winning power in India. "I find it difficult to suspend my anxieties about Narendra Modi", he said.

Here it's possible to enter dangerous territory, as my gut reaction is to immediately assume that anyone William Dalrymple dislikes is bound to be a good thing!
Posted by Craig at 09:00