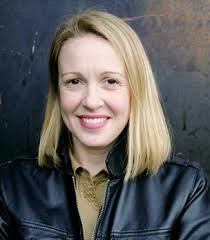 BBC Two has a new controller (and not a fat one). She's called Kim Shillinglaw.

She worked for the Guardian (specifically Observer Films) before moving to ITV and Channel 4, finally joining the BBC in 2006, where she helped develop Horrible Histories. She worked in BBC News, including Newsnight. She then became the head of science and natural history in 2009, overseeing the rise of Brian Cox.

According to the Guardian, Kim's achievements have been to put more science programmes into the BBC's schedules and more female experts and presenters on screen.

She shares BBC director of television Danny Cohen's concerns about the lack of women of TV comedy shows, once tweeting "Why are only women on Mock the Week compilations laughing cutaways? They never get to speak. Surely not because not funny?"

Her husband, Steve Condie, also worked for the BBC as a history development executive. He also worked on Newsnight. He left the BBC in 2012, and now works for Oxford Scientific Films.

Her hobby is collecting animal bones.

Just thought you'd like to know.
Posted by Craig at 23:10