Best of a bad bunch

This seems to be a case of the BBC’s anti-Israel bias being the least of the worst. In the spirit of "The BBC’s is the worst form of bias, except for all those other forms that can be observed" it seems that the BBC, although far from perfect, hasn’t stooped so low as the Guardian, or fallen so deeply into the abyss as - of all things - the Times.

There was a terror attack in Israel on the evening of April 14th by a terrorist / gunman/ hero, which killed an Israeli father of five / off-duty policeman / settler, depending on whose side you’re on.

This incident was the subject of two BBC Watch articles that dealt with various amended versions of the BBC report.

On 16th April the BBC made a brief mention of the incident, albeit buried in an article about the peace talks.

“Israel is also angry at the killing of an off-duty Israeli policeman by a gunman in the West Bank on Monday, on the eve of the Jewish holiday of Passover. His wife and child were wounded in the attack outside Hebron.” 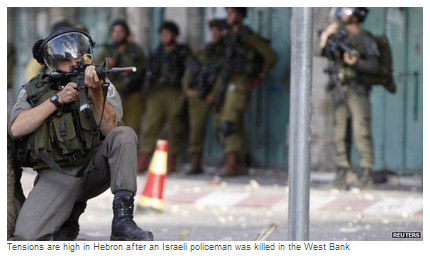 The BBC’s original article was illustrated by a photograph of Israeli solders, one aiming his weapon, with the caption:  ”Tensions are high in Hebron after an Israeli policeman was killed in the West Bank” A lone gunman shooting at cars is clearly a terror attack, yet he military style picture implied that the policeman was killed in the line of duty. The details of the attack were freely available, had one of the BBC’s intrepid reporters taken the trouble to seek them out.

“Tensions were raised on Monday when an off-duty Israeli policeman was killed by a gunman in the West Bank, on the eve of the Jewish holiday of Passover. His wife and child were wounded in the attack outside Hebron.”

As BBCWatch points out, the BBC did not fully report the terrorist nature of the attack, nor that it was praised by Hamas and the Palestinian Islamic Jihad. Nor did the BBC spot that no-one from the PA had condemned it.

All articles in which the BBC refer to this incident primarily concern the postponement of peace talks; references to the attack appear in ‘non-consecutive paragraphs”
This reporting contrasts sharply with the screaming headlines habitually employed whenever a Palestinian is shot by an Israeli soldier. Whole stories are frequently devoted to news of the death or injury of every Palestinian unwise enough to attempt to breach the security measures Israel is forced to take in order to protect its citizens from just such occurrences.

However, the Guardian was worse than the BBC. In a piece entitled “The Guardian has absolutely no idea why a Jewish man was murdered near Hebron” Cif Watch points out several examples of biased writing from the Guardian’s Peter Beaumont, their new Jerusalem correspondent.

“One Israeli was killed three others injured after their car was hit by gunfire as they travelled through the West Bank on the eve of the Jewish Passover holiday.”

Our old friend passive language, which alludes to the pesky “gunfire” that’s apt to snuff out anyone unlucky enough to be at the wrong place at the wrong time. Like lightening. But for good measure, the Guardian introduces an element that the BBC, for once, does not.  The settler thing.

“The family in the car that was hit was understood to be en route from their home in Modi’in – an Israeli town split across occupied Palestinian and Israeli territory – to visit the mother’s family for the traditional meal that commences the Passover religious festival. The shooting was the second incident in the past two days on the West Bank.”

“This paragraph represents the first attempt to impute ‘settler’ status upon the victim.  However, Beaumont gets it wrong. Modi’in does not extend into “Palestinian territory”. (The Maccabim section of the greater Modi’in-Maccabim-Re’ut municipality – encompassing a few zip codes – are in what’s known as No Man’s Land, which refers to land between Israel and the West Bank whose sovereignty was never fully clarified after the War of Independence in 1948.)”

The article, like the BBC’s, all but attempts to justify this attack by stating:
” The shooting comes amid increasing tensions following a stalemate in peace talks.”
before again returning to the theme of settlements.

“It also comes hard on the heels of permission by the Israeli army on Sunday for three settler families to move into a building in nearby Hebron, after a long legal battle and culminating on Sunday with the authorisation by Israel’s defence minister, Moshe Ya’alon, of the first new settlement in Hebron since the 1980s."

Then Cif Watch has:

“Beaumont descends to the absurd, feigning ignorance as to the likely motive: ”However, with no immediate claim of responsibility the precise motives for the shooting remained unclear.”

...and finishes by highlighting another passage with selective use of passive language “five Israelis have been killed” (by evil spirits?) neatly juxtaposed with “82 Palestinians have been killed by Israeli security forces”.
But wait. Here’s the Times. “Israeli policeman is shot dead amid fury over settlers’ return.”
There we have it. All the elements of bias rolled into one. This report is tagged ‘Catherine Philp. Hebron.’ 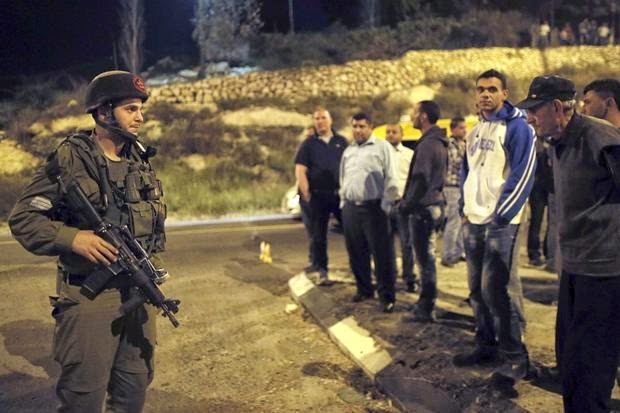 “An Israeli policeman was shot dead near Hebron on the eve of the Passover festival as Jewish settlers celebrated their return to a disputed house in a Palestinian area of the West Bank city.Three families moved into the building on Sunday evening, protected by Israeli soldiers, hours after Moshe Yaalon, the Israeli defence minister, granted permission for their return — six years after their initial eviction.”

says Catherine. The rest is behind the paywall, but I’ve got the paper version.

“The first apparent retaliation for the return of settlers came on Monday night when a man opened fire on a car outside Hebron” she states confidently. So it wasn’t just any old terrorist attack. it was a perfectly formed retaliation.

There follows several paragraphs about the Supreme court ruling that found in favour of ‘the settlers’ , the long-running ownership dispute over the building, the final decision being in the hands of the defence minister Moshe Yaalon and the claims that this was  a provocation aimed at sabotaging US-backed negotiations.

She quotes a Palestinian human rights activist, as you do, who voiced predictable opinions about exposing, exploiting and expanding, and a settler who voiced predictable opinions about torpedoing negotiations.
She gives statistics about the number of settlers, residents of Hebron, Palestinians, soldiers and border police, how many restriction have been imposed, how many acts of violence have been perpetrated by both sides, and how many Muslim worshippers Baruch Goldstein killed.

In fact the rest of the article is devoted to the Supreme Court ruling about the disputed house, the evictions and reinstatement of the settlers, the legality or otherwise of the purchase of the property and the fact that at one stage the eviction prompted “violent retaliation against their Palestinian neighbours”.
By the end of the piece Catherine Philp has all but forgotten about the late Baruch Mizrachi and his wife and children. Nevertheless she’s hell bent on implying  moral equivalence between the Israelis and the Palestinians, despite the first five words of the headline. Someone was shot dead, remember?  So at best the BBC was the least bad and at worst the BBC was the least worst.