But the truth is we all say that... 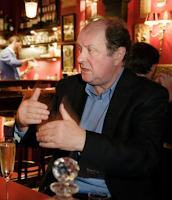 As you might guess, his first answer was so long and laboriously delivered it swallowed up around half of the 50-minute programme, leaving little time for any other predictions or anyone else to speak. The rest of the BBC reporters just sighed, gave up and went home, and Jim just carried on talking. I fell asleep.

Here's how it began, with Jim's 'take' on President Trump:

Owen Bennett-Jones: We're going to start with the United States and Donald Trump. And we've all followed the last year of Donald Trump, Jim. What's ahead for Donald Trump in 2018?

James Naughtie: Well, I think we've got to start with the fact that some people forget, Owen, which is this: that his rating at the end of one year in office is lower than the ratings, on equivalent poll findings since the '50s, than any other President in our lifetimes. I mean, a CNN poll in December, which is following on the whole Gallup/ORC thing over the years - same questions, same timing - had him at 35%. Obama at the same time was at 75%. Now, this is extraordinary. It doesn't mean he can't excite that base - and he does, every day on Twitter and with these regular rallies - but the truth is he is fantastically unpopular among Americans. If you were a Republican member of Congress in a, what the Americans would call, an 'upscale district' - you know, a reasonably affluent district, let's say in California, where there are five Republicans very worried about their seats now. If you look at what's happened to women voters vis a vis Trump, they're deserting him like snow off a dyke. (I speak from a very frosty Edinburgh.) I think that, you know, we all say that, you know, this can't go on, he does things that no-one else has done but he does it. I mean, my feeling about Trump is that at some point I suspect - and this is my prediction on Trump, Owen - that somebody somewhere in the administration, either in the White House or very close to it - will break cover this year and tell us what the chaos in the White House (which it's generally accepted to be) has been like. And I think that will be devastating for Donald Trump. Of course, there's a section of the American public which simply won't believe it, but I think it will be out there.