It’s hectic chez Sue at the moment, but I’d like to quickly link to pieces that relate to a couple of our earlier posts.

Time (lack of sufficient) sometimes forces me to combine several issues in one piece and I often have to condense material that I’d have liked to expand upon much more fully. Not to worry; someone far more eloquent has done it so I don't have to.  Here’s Douglas Murray’s article for Gatestone Institute about President Trump and Jerusalem. He compares Emily Maitlis’s appalling Newsnight interviews, first with Ghada Karmi and next with Mark Regev.

The reaction around the world in recent days has been a reminder of the one central truth of the whole conflict. Those who cannot accept that Jerusalem is the capital of the State of Israel tend to be exactly the same as those who cannot accept the State of Israel. Consider the expert whom the BBC's flagship current affairs programme Newsnight chose to bring on to receive soft-ball questions on this issue. Dr. Ghada Karmi, from the Institute of Arab and Islamic Studies at the University of Exeter, a notorious opponent of Israel, was inevitably given the sort of respectful interview style that Newsnight presenters generally reserve for when they are interviewing Madonna or some other mega-star they cannot believe their luck at having gotten to speak with.

Here is what Ghada Karmi had to say -- with no meaningful challenge from the programme's presenter, Emily Maitlis.

Ghada Karmi: We know that Donald Trump is not a free agent. He is surrounded by pro-Israel advisors, pro-Israel officials.

Emily Maitlis (BBC): To be fair the American stance towards Israel has not differed particularly from one President to another.

Karmi: No, because it's always been dictated by Israeli interests.

Karmi: No – of course not. He can't. He's compromised. He is surrounded by pro-Israel propagandists, people who want Israel's interests above any other and he cannot operate as a free agent even if he had the wit to do it.... Why it is so dangerous is because you know one of the first things that might happen -- and watch for this -- is that Israel will be emboldened to take over the Islamic holy places. It's had its eye on the Aqsa mosque for a long time.

To the surprise of absolutely nobody, when Maitlis then turned to interview the Israeli ambassador to the UK, she adopted a different tone.

Ambassador Mark Regev was not given these sorts of soft-ball questions. If he had claimed that the Palestinians were planning to bulldoze the Western Wall, it seems unlikely he would have been allowed to say it uncontested. He was in fact treated throughout as though he were simply some well-known variety of idiot or liar, who had no concept of the "offence" (a favourite threat term) that this move by the American President would cause Palestinians.

Ghada Karmi was not challenged on the claim that the Israelis were about to take over any and all Islamic holy places (to do what?), but Ambassador Regev's suggestion that the State of Israel already has its Parliament, Supreme Court and every wing of government in Jerusalem, and that Jerusalem might just be Israel's capital, was treated as though it were the most inflammatory nonsense the BBC had ever heard. 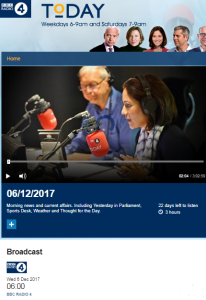 The second piece that filled in gaps  (left by me) concerns another comparison between two interviews by John Humphrys on the Today Programme, 6th December.

Again, the tones employed by the interviewer with the Israeli and Palestinian representatives were 'chalk and cheese'. My post attempted to take on several issues from the same day’s episode, but BBC Watch has posted part one (of a two-parter) that addresses the first interview in detail.
Needless to say, the hostility of the tone used to question the reasonable sounding Israeli, Nir Barkat, was palpable, whereas Humphrys took Manuel Hassassian’s histrionics in his stride.
There’s a full transcription of the first interview here   - then Hadar Sela gets out the stopwatch and goes into full Craig mode:

Leaving out the introduction, this interview lasted just over four minutes, during which Humphrys interrupted his interviewee on five occasions and spent well over a quarter of the time (1 minute and 14 seconds) speaking himself – including lengthy statements .

I await part two with interest.