One man and his dog 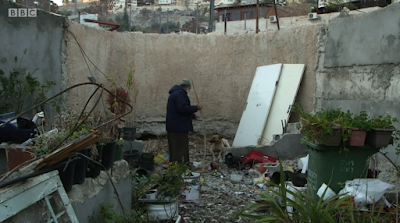 Also on last night's BBC News at Ten, Jeremy Bowen metaphorically wagged his finger and then, after beginning his report by saying that that US recognition of Jerusalem as Israel's capital has led to bloodshed as predicted, ended it by saying that things were actually "quieter...than many expected". He looked somewhat deflated.

Look out for poor old Saleh, standing amidst the rubble of his demolished home. A Jeremy Bowen report wouldn't be complete without someone like poor old Saleh, nor without a bit of pointed anti-Israel framing from the BBC's Middle East editor:

Newsreader: Israel has carried out air strikes against targets in Gaza, injuring ten people, after Palestinian militants fired a rocket into Israeli territory. Two Palestinians have been killed in clashes with Israeli security forces during a second day of protests in the West Bank and Gaza against Donald Trump's decision to recognise Jerusalem as Israel's capital. Our Middle East Editor, Jeremy Bowen, reports from Jerusalem.

Jeremy Bowen: Palestinian protesters confronted Israeli security forces on the roads leading into all the big towns on the West Bank. Plenty of people had warned that US recognition of Jerusalem as Israel's capital would lead to bloodshed. It has. One dead, and many wounded, across Gaza and the West Bank. That's the land Palestinians want for a state, with a capital in East Jerusalem.

Most Israelis are delighted President Trump has accepted their reality. He [the Israeli vox pop] said:

We are steadfast here, eternally here since ancient times. This city was given to Jews 3000 years ago. We are the continuation and the US has recognised that.

But the golden dome behind him is part of the third holiest place in the world for Muslims. And a few hundred yards away, several thousand Palestinians were going home after the noon prayer. The reality of this city is that many Palestinians live here. Life can be hard for them. Saleh's home has been demolished twice this year by the Israeli authorities. They give Palestinians very few building permits, while constructing thousands of homes for Jews.

I born in this land, and my father and my grandfather. And I will die in this place. I will not leave it, not for Israel, not for Jews, and not for the United States.

Palestinian areas of Jerusalem were quieter after Friday prayers than many expected. Whenever a crowd formed, mostly of onlookers rather than protesters, the police broke it up. Mr Trump's declaration is a big challenge for the Palestinian national movement. It will turn into a big defeat for it as well if the Palestinians aren't able to organise a coherent challenge to what's happened, and to build on all the international criticism there has been. Israel feels on the up. It's been given American presidential recognition in this city, without mention of occupation and without, so far, a single concession in return. Jeremy Bowen, BBC News, Jerusalem.
Posted by Craig at 13:17