Fergal Keane on the DRC

It's good to see that the BBC is placing more emphasis on Africa and that Fergal Keane, their new Africa editor, is making good on his pledge to report goings-on there more fully.

He's just been to the Democratic Republic of the Congo - site of the worst war (or wars) since World War Two. The BBC (though far from alone in this) never gave that conflict the coverage it deserved, preferring to focus on much less deadly conflicts instead like that between Israel and the Palestinians.

Hopefully then, the BBC is now trying to get its priorities right (though it still came lower down the running order than the Jerusalem story). 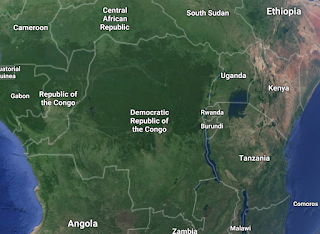 Last night's BBC News at Ten saw Fergal Keane in the BBC studio explaining the situation their to Fiona Bruce.

Newsreader: At least 14 United Nations peacekeepers have been killed and more than 50 injured in an attack on their base in the Democratic Republic of Congo. The UN said the peacekeepers were from Tanzania. Five Congolese soldiers were also killed. The attack took place in North Kivu province in the east of the country, where several rival militia groups are fighting for control. Our Africa Editor, Fergal Keane, is here with me. You've just come back from Congo. What's the background to this?

Fergal Keane: Well, the UN has for some time been a target in eastern Congo because it acts in support of the Congolese government. The real context behind this, even though the group who carried out the attack, the ADF, are Islamist, well it's not like Al-Shabab in Somalia. The real context is a deeply unpopular central government that's clinging to power, whose President, Joseph Kabila, has gone beyond his two term limit. And you have a sense now among warlords, militia groups, among wider civil society, that an endgame is beginning. You have jockeying for power. Congo itself is a mess at the moment. You've more than 4 million people displaced. And at the same time as this, you have a UN peacekeeping force of 20,000 and they are now cutting it down by 3,000, under pressure from the Trump Administration, which wants to reduce peacekeeping costs. This at a time, as I say, when violence is on the rise. I've just come back and I've seen in many parts of the country how those UN peacekeepers, the very people who were attacked last night, are the only people who stand between the ordinary citizens who are being relentlessly attacked, and the exactions of militia groups, warlords and the security forces of their own government. So this couldn't come at a worse time.

I saw that after reading the Guardian's account of the atrocity and noted some striking differences:

Firstly, the Guardian's account doesn't downplay the Islamist element of the atrocity, unlike Fergal Keane's.

I do find with Fergal Keane that you rarely come away from his reporting without feeling that you're being not-too-subtly preached to.
Posted by Craig at 13:17